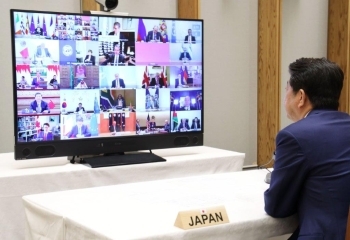 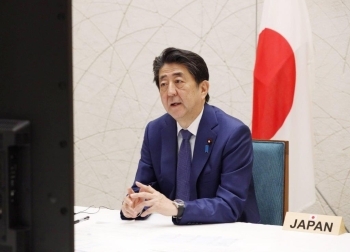 On Thursday, March 26, from 9 p.m. for approximately 130 minutes, Mr. ABE Shinzo, Prime Minister of Japan, attended the G20 Summit Video Teleconference Meeting. The summary is as follows. The meeting was called for and hosted by Saudi Arabia, the G20 Presidency this year. This was the first G20 Summit Meeting to be held via video conference. In addition, following the meeting, the Leaders’ Statement (English (PDF)

1. In relation to the novel coronavirus, the participating G20 leaders discussed the economic conditions in their countries as well as measures to prevent the spread of infections.

2. As one of the lead speakers, Prime Minister Abe emphasized two major points,explaining the situation in Japan related to the novel coronavirus. Firstly, he suggested that the development of antiviral medicines should be accelerated by concentrating the world’s wisdom, including the World Health Organization (WHO) and the private sector, in order to resolve the current situation. Secondly, he called for the G20 to implement bold and large-scale economic and fiscal policies, as this is the time for the G20 to show its potential as it did during the 2008 financial crisis. The other leaders supported these remarks made by the Prime Minister Abe.

3. With regard to the 2020 Tokyo Olympic and Paralympic Games, Prime Minister Abe explained that he had agreed with International Olympic Committee President Bach about postponing the Games for about one year, and to host them by summer 2021 at the latest. He indicated the determination to convene the Games in their complete form as a symbol of humanity’s victory over the novel coronavirus. In response, the understanding andsupport were expressed by the G20 leaders.

4. The participating G20 leaders confirmed that measures taken together with the international community are needed to respond to the spread of the novel coronavirus, and agreed to continue to cooperate as the G20.