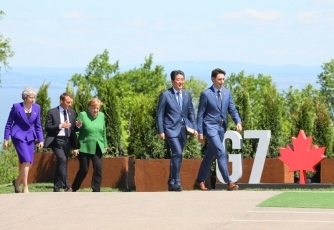 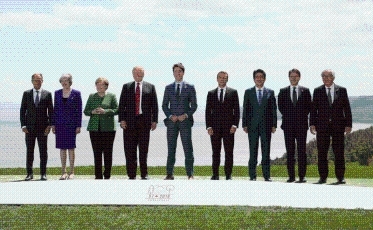 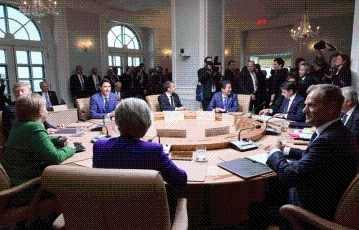 On June 8 and June 9 Prime Minister Abe attended the G7 Charlevoix Summit held in Quebec, Canada. The overview of the summit is as follows.

Based on discussions among G7 leaders, the Charlevoix G7 Summit Communiqué (English / Japanese) was released. The following Declarations and Annexes to the Communiqué were also released.

In the context of the deepening interdependence of the global economy, anxiety and dissatisfaction with regards to globalization, etc. are giving rise to the temptation to protectionist movements, sometimes causing conflicts of interest between countries, but even in that context, at this G7 Summit, the leaders confirmed the promotion of a rules-based international order, continuation of fighting protectionism, and the crucial role of a rules-based international trading system, and also agreed to a variety of measures for fostering a truly level playing field.

Prime Minister Abe stated that nothing other than the universal values shared by the G7, namely the freedom, democracy, human rights, and the rule of law which guarantee the free thought and activities of individuals, will bring about peace and stability in the international community, and he strongly emphasized that the G7 should play a greater role than ever before as driving forces in the international community, while leading discussions regarding innovation and employment, trade, North Korea, gender, etc.

A. The global economy

Prime Minister Abe pointed out that the global economy continues to show steady performance and the resilience of the emerging markets overall has improved, while on the other hand some emerging economies show potential vulnerabilities, so in these circumstances it is important for the G7, which has developed a free and fair economic order and led the growth of the world, to be united in order to dispel unease in the markets. G7 leaders confirmed that the G7 would cooperate to play a role for the stability of the global economy, including continuing to closely monitor market developments.

Regarding trade, lively exchanges of views were held, and as an overall direction candid discussions were actively conducted on how to realize free and fair trade, including the necessity of improving the functioning of the WTO, and also on market-distorting measures such as non-tariff barriers and subsidies, etc.

Moreover, with the perception that free, fair, and mutually-beneficial trade and investment are key engines for growth and job creation, the leaders recommitted to the conclusions on trade of the G20 Hamburg Summit, and agreed on the importance of modernization of the WTO, responses to inadequate protection of intellectual property rights such as forced technology transfers, etc., development of international rules, on market-distorting industrial subsidies and state-owned enterprises, etc., responses to the excess capacity including in steel sector, and the development of a new set of international guidelines for government –supported export credit, etc.

Prime Minister Abe stated that the G7 spending our time retaliating each other by taking measures that restrict trade would not be to the benefit of any country, and that the G7 should unite to send the message that it would resolutely oppose to unfair trade and investment practices and protect free and fair markets.

Discussions were held about how sustained growth can be achieved against the backdrop of population decline, the falling birthrate and population aging, and the progress of technologies such as artificial intelligence (AI), etc., how to respond to the development of these kinds of technologies, AI, digitalization, and big data, further more the perspectives of human resources development and education, and the promotion of women’s empowerment, etc. Based on a shared perception regarding the background of an era in which new technologies are progressing, the leaders shared an awareness of the issues on how to respond to those changes to achieve sustained and inclusive growth.

Regarding the issues that Japan is having to face before the rest of the world, namely the falling birthrate, population aging, and population decline, Prime Minister Abe introduced the outcomes to date from the policies of Abenomics and the promotion of women’s empowerment, and in addition, regarding innovation, he pointed out that we should not fear innovation excessively but rather positively capture its potential.

He also expressed his concerns regarding the growing movement toward digital protectionism using control approaches such as obstractions to the overseas transfer of data and to the entry of foreign companies, forced technology transfer, etc., and declared Japan’s intention to contribute to global rules making by stating that the development of an open and fair market environment that includes the free flow of information and data while also respecting privacy and security.

Furthermore, he emphasized that at a time when markets for new business models that cross national borders, such as electronic books, online music distribution, etc. are getting larger due to the progress in the digitalization of the economy, sufficient taxation is not possible using existing taxation principles, so it is important for the international community to cooperate to respond to the new situation, the G7 should play a leading role, and Japan, as the G20 presidency next year, intends to strongly move these discussions forward.

Regarding the situation surrounding North Korea, Prime Minister Abe led the discussions, and in-depth discussions were held among the leaders. All the members concurred and expressed support to the remarks by Prime Minister Abe, and as a result the G7 agreed on the necessity to achieve complete, verifiable and irreversible dismantlement (CVID) of all of its weapons of mass destruction (WMD), ballistic missiles, as well as its related facilities by North Korea, to call for full implementation of relevant United Nations Security Council Resolutions (UNSCRs) by North Korea to this end, and to urge North Korea to take concrete actions, etc.. G7 also confirmed that it would provide support for the success of the U.S.-North Korea Summit Meeting. Moreover, support was expressed to Prime Minister Abe’s call for understanding and cooperation toward an immediate resolution of the abductions issue, the most important issue of all.

During the discussions about the situation in Asia, the discussions also touched on China’s recent movements. As a result of the discussions, the G7 agreed that it is important to urge China to play a constructive role to address regional and global issues, etc.

Japan participated in the discussions with the basic understanding that dialogue with and the involvement of Russia are necessary, and that it is necessary to urge Russia to play a constructive role in various issues, in particular North Korea.

At this G7 Summit, gender equality was adopted as a cross-cutting theme, and discussions that included the perspective of gender equality were conducted for all of the topics. By doing so, gender mainstreaming has been accelerated further following on from the Ise-Shima Summit, etc. In particular, the empowerment of women contributes to economic growth, and the promotion of quality education and work-life balance is necessary in order to promote the empowerment of women, so specifically discussions were conducted on support for women’s education in developing countries, the entry of women into scientific fields, and the reduction of the gender wage gap, etc. are necessary. On the other hand, the leaders agreed that it is necessary to respond to new issues brought about by digitalization and agreed on the importance of ending on-line violence, harassment, etc.

Prime Minister Abe presented the fact that the promotion of women’s empowerment has been placed at the core of the growth strategy of Abenomics, that he is working on the realization of ‘A Society where Women Shine’ as one of the most important policies of his administration, and that Japan has been hosting the World Assembly for Women: WAW! since 2014, etc., and declared that next year WAW! would be held by Japan as the 2019 G20 presidency in conjunction with W20 (Note: Women 20; this is one of the engagement groups of the G20 and every year women leaders from the countries participating in the G20 gather together to hold a meeting of the group and issue recommendations to the G20 Summit). Furthermore, he declared Japan’s commitment to contribute 200 million dollars and provide support for quality education and human resources development for girls, adolescent girls, and women in developing countries.

In addition, under an initiative by Canadian Presidency, the Gender Equality Advisory Council was launched and recommendations were submitted, and then the members of the council were invited to the breakfast at the Summit, where they conducted freewheeling exchanges of views with the G7 leaders.

These were discussions that it is important for the international community to advance the realization of a low-carbon society, in addition to emissions reductions, in order to address climate change as a global issue, and that these are not negative for the economy but could go along with growth. In addition the view was presented that the warming of the oceans is having a negative impact on biodiversity, and in the light of this they intend to cooperate toward implementation of the Paris Agreement and realization of a circular economy.

Prime Minister Abe mentioned regarding the climate change issue that invigoration of businesses involved in energy transition and decarbonization is an engine that will drive the economic growth of the world in the future, and emphasized that it is important that the G7 shows a willingness to realize decarbonization so that the international community overall can move toward achievement of the 2°C goal stated in the Paris Agreement, and that Japan would utilize the advanced technical capacities it possesses to drive the decarbonization in the world. Furthermore, he declared that for the sake of steady implementation of the Paris Agreement he had given instructions to accelerate the review work toward establishing long-term strategies as new visions not bound by previous conventional wisdom, which instigates a virtuous cycle for the environment and growth, also encouraging business-led technological innovation.

Prime Minister Abe stated that disaster risk reduction is one of the important agenda for Japan, and that Japan hosted the 2015 UN World Conference on Disaster Risk Reduction and is promoting the Sendai Framework for Disaster Risk Reduction in order to share lessons learned and expertise accumulated through the 2011 Great East Japan Earthquake, etc. for the benefit of the people of the world. Furthermore, regarding measures against marine litter, he stated that ocean plastic waste in particular could have a negative impact on the ecosystems of oceans and eventually may have an impact on the health of people, that this could not be solved through the efforts of one country alone or even through the efforts of the G7 or the developed countries alone, so it is necessary to treat as a challenge for the entire world including the developing countries. He also stated that it is essential to extend measures for reduce, reuse, and recycle (“the 3Rs”) promoted at the Ise-Shima Summit, and for improving capacity related to waste management, etc. internationally, in order to reduce ocean plastic waste, and that Japan intends to promote cooperation to support the introduction of environmental infrastructure for these purposes, and to tackle these issues at next year’s G20 as well.

Some leaders expressed agreement with the point, as stated by the prime minister, that it is necessary to treat the measures against marine litter as a challenge for the entire world including the developing countries. In addition, lively exchanges of views were held regarding the impact of climate change and its adaptation measures, infrastructure development to enhance resilience, improvement of access to finance, ocean resources management based on scientific knowledge, the conservation of biodiversity, etc. Furthermore, several leaders pointed out the importance of maritime security, which is the foundation of economic activities in the oceans, and Prime Minister Abe expressed support for this view.

On June 9 French President Macron announced in the press conference after the end of the G7 Charlevoix Summit that the G7 Summit in 2019 would be held in Biarritz in the southwestern France at the end of the summer.