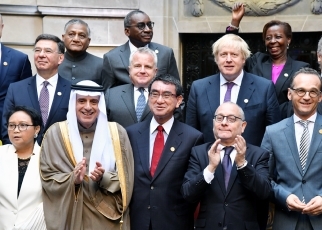 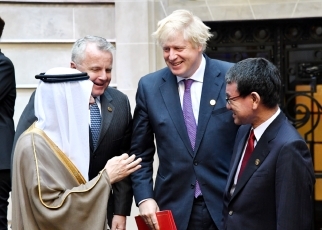 At the meeting, discussions took place based on the agenda items of “Contribution, Expectations, and Nature of the G20” (Working Dinner), “Multilateralism and Global Governance” (1st Session), and “Actions for Fair and Sustainable Development” (2nd Session). After the meeting ended, Minister Kono held a Joint Press Conference with the Foreign Ministers of Argentina, which holds the G20 presidency this year, and Germany, which held the G20 presidency last year. Minister Kono announced at the Joint Press Conference that next year’s G20 Foreign Ministers’ Meeting will be held in Nagoya City, Aichi Prefecture, on November 22 and 23 next year.

Furthermore, during this meeting, Foreign Minister Kono held bilateral meetings with the United Kingdom, the Netherlands, Indonesia, South Africa, and Australia, and held exchanges of views about bilateral relations and issues in the international arena.

1. Overview of each Session

(A) Only the representatives of each country attended, and an open and candid exchange of views took place. At the beginning, Argentinian Foreign Minister Jorge Faurie stated that he thought that the role played by the Foreign Ministers’ Meeting in the G20 was increasing, emphasizing the importance of a wide range of discussions in an era which is becoming uncertain due to the evolution of technology.

(B) Subsequently, Minister Kono was encouraged to make a statement on behalf of the G20 troika and mentioned the importance of free trade as of as the TPP11 and WTO, etc..Moreover, he mentioned that promoting innovations such as AI and robotics and expanding the pool of human resources were creatinginclusive growth opportunities for those countries facing a declining population and aging society. Following this, he touched on the issue of terrorism, the importance of building institutional frameworks in Africa, etc., and then emphasized that the G20 meeting was functioning as a forum for understanding different views and mutual cooperation.

(C) After the statements from Japan and Germany as the G20 troika, other participants repeatedly pointed out the importance of the regional situation and issues, such as cyberspace, Venezuela, North Korea, etc.

(A) At the beginning, Argentinian Foreign Minister Faurie stated that it was high time to take stock of G20’s activities for ten years from 2008 onwards. Furthermore, the Minister mentioned the importance of multilateralism, and also pointed out the necessity of flexibility in multilateralism.

(B) Minister Kono, highlighting the importance of multilateralism and of the United Nations in the multilateral framework, pointed out the necessity of the Security Council reform, as the Council does not reflect the realities of the international community. Touching upon the necessity of maintaining and strengthening the international nuclear disarmament and non-proliferation regime centered on the NPT and that of early entry into force of the CTBT, he referred to the need to take multilateral initiatives in the areas of licit and regulated trade in conventional arms, combating corruption, cyber and climate change.

(3) 2nd Session: Actions for a Fair and Sustainable Development

(A) Throughout the session, lively exchanges of views were held regarding the actions the G20 should take as to the future of work, infrastructure for development, and food security.

(B) Wrapping up the meeting, Minister Kono emphasized that the G20 should discuss measures for the creation of a sustainable future, and then pointed out that innovation and openness are the keys to the solution to the challenges of population aging, that democracy and development is necessary for a fair society, that the utilization of an international solidarity levy, including a financial transaction tax, is an idea for achieving the SDGs, and that the quality of infrastructure, including openness and peaceful use, is very important. Furthermore, he emphasized that the G20 needs to take more than economy. In addition, in relation to the theme of the 1st Session, he stated that the issue of the nuclear and ballistic missile development by North Korea demonstrates the importance of multilateralism through the United Nations, that CVID is essential and utilization of the IAEA is also necessary regarding nuclear and ballistic missile development by North Korea, which is a serious challenge to the NPT regime, and that signing and ratification of the CTBT by North Korea was necessary. Moreover, he stated that he was looking forward to the discussions at the G20 Foreign Ministers’ Meeting to be held in Nagoya City, Aichi Prefecture next year.

(C) Other participants pointed out the importance of consideration of the environment including climate change, taking measures against the digital gender divide, private resource mobilization in infrastructure, and the implementation of a compact with Africa.

Minister Kono announced that next year’s G20 Foreign Ministers’ Meeting would be held in Nagoya City, Aichi Prefecture on November 22 and 23 at the conclusion of Japan’s G20 Presidency year. He stated that at the next year’s Foreign Ministers’ Meeting, based on the outcomes achieved under this year’s Argentinian Presidency. Japan would exercise strong leadership in sustainable and inclusive growth and stability, as well as in leading efforts to tackle global challenges in the face of growing inequality due to globalization.