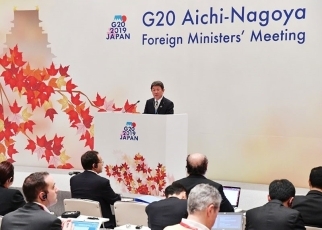 On November 23 (Sat) from 3pm to 3:21pm, Mr. MOTEGI Toshimitsu, Minister for Foreign Affairs of Japan, held a Presidency Press Conference for the G20 Aichi-Nagoya Foreign Ministers’ Meeting during his visit to Nagoya. The account of the press conference is as follows.

We were able to reaffirm the outcomes of the Osaka Summit at this year’s Aichi-Nagoya Foreign Ministers’ Meeting as the culmination of Japan’s year of the G20 Presidency, and I feel this will become a springboard leading to concrete action from next year.

All three sessions at the meeting reflected the diversity of the G20 members and invited countries, and featured discussions full of suggestions from a variety of viewpoints on the urgent issues the international community faces. Today, I would like to present the main points from the meeting from the Chair’s standpoint. Please note that I am not able to go into detail about which representative said what during the meeting itself because of a practice among the participating countries.

The first session included a discussion on the theme of “Promotion of Free Trade and Global Governance”. Participants carried out in-depth discussions having shared awareness concerning how to utilize the recent rapid advancements in digitalization to bring about economic growth and what issues should take priority in global economic cooperation, policy coordination, development of standards, while the confidence on multilateral frameworks is undermined and trade tensions and geopolitical risks are escalating.

First, a number of participants pointed out the challenges the current multilateral trade system is facing, with some participating members touching upon the need for revisions to unfair trade practices and unilateral measures. Participants also shared the urgent need for immediate WTO reform while considering the possible cease of functioning of the WTO Appellate Body next month at the earliest. In this regard and bearing in mind the 12th WTO Ministerial Conference slated for June next year, participants confirmed that it would demonstrate its leadership in promoting the speedy development of international rules for the digital economy under the “Osaka Track”.

Second, many participants remarked on the importance of implementing and materializing guidelines and standards into concrete policies and systems in areas such as (1) international principles for rules and tax structures on digitalization, (2) global standards for improving the quality of infrastructure investment, and (3) human-centric AI principles.

Third, I introduced Japan’s initiatives as a “flag bearer for free trade”, including the Japan-U.S. Trade Agreement and Digital Trade Agreement, the Comprehensive and Progressive Agreement for Trans-Pacific Partnership (TPP11), and the Japan-EU EPA. I also explained the significance of agreeing on Regional Comprehensive Economic Partnership (RCEP) with 16 countries, where negotiations reach to a critical stage. Several countries indicated appreciation that such bilateral and regional free trade agreements complement the multilateral trading system and promote the development of quality global standards.

At the next session on the SDGs, discussions were held on a lot of key areas including the implementation of the SDGs in local areas, mobilizing funding through public-private partnerships, improving infrastructure, enhancing connectivity, education and human capital investment, as well as gender and women’s empowerment.

Each participant stated their appreciation for initiatives agreed upon at the Osaka Summit, including the “Osaka Blue Ocean Vision” on marine plastic litter and the “G20 Principles for Quality Infrastructure Investment”. Representatives also introduced barriers to promoting the SDGs in both domestic actions and international cooperation, good practices in G20 countries to overcome these obstacles, and bilateral cooperation to promote the SDGs.

In addition, based on discussions at the SDG Summit in September, the G20 was able to gain a common understanding on how to steadily monitor and strengthen efforts in areas where progress is delayed and how to accelerate measures for the “Decade of Action” by 2030.

In order to ensure that the discussions from today are turned into action, I hope that the G20 will continue to be proactive under the leadership of Saudi Arabia which will assume the Presidency next year in order to steer actions by the international community.

Discussions at the final session, Africa’s Development, took place in a form of a working lunch. Based on the outcome of the 7th Tokyo International Conference on African Development (TICAD7) held in Japan in August, discussions in this session focused on the following three areas: (1) economic growth, (2) development and (3) peace and security, keeping in mind the need for the international community to support Africa’s own efforts.

In addition to expressing its high appreciation for and expectations of the outcomes of the TICAD7, participating countries pointed out the importance of working closely among the international community, including the G20. The G20 members also introduced their initiatives, such as forums with African countries, indicating their strong interest in Africa.

It was also an important outcome from this session that the participants confirmed that the G20 must take up a leading role for the steady expansion and establishment of the “G20 Principles for Quality Infrastructure Investment”.

Our ability to implement the outcomes of the Osaka Summit and these discussions in the future will be put to the test. Japan will continue to demonstrate leadership in the G20 together with the next Presidency, Saudi Arabia.

Lastly, at the dinner last night, the foreign ministers had an opportunity to enjoy local produce from Nagoya and Aichi, as well as ingredients from disaster areas in East Japan. I believe that the warm hospitality we received from the local residents helped energize and enrich our discussions. Again, I would like to express my sincere appreciation to the participants for their active contributions to the discussion, and to everyone from Aichi and Nagoya for their cooperation.

(Kyodo News, SUZUKI)
This meeting is the last in a series of meetings hosted by Japan as the G20 Presidency. During this meeting, discussions were held on the themes of free trade, the SDGs and Africa’s development. What were the major achievements?

In addition, in order to achieve the urgent reform of the WTO and the development of international rules for the digital economy, common understanding of the international community is necessary. Could you elaborate more about what issues remain to be tackled as a chair of today’s meeting?

(Minister MOTEGI)
I have just mentioned the results of each of the three themes at the meeting. If you need any additional information, please let me know.

Participants were unanimous in their recognition that we must move forward with WTO reform and the development of a set of international rules for the digital economy with a sense of speed in order to keep pace with the rapidly advancing technological innovations. We also confirmed that the G20 needs to play an active role in this.

In addition to this, there are two challenges that I realized today when serving as chair of the meeting. Firstly, the advancement of digitalization. This brings us many advantages. At the same time, however, more needs to be considered about the regulations to respond to adverse effects. When dealing with issues such as cyber security and privacy in particular, excessive regulations should not block free economic activity. In other words, I feel that an important point is that a system be developed that would not “kill a bull by straightening its horns.” In the concept of “Data Free Flow with Trust”, “free flow” comes first and I think “trust” comes next. It should not be the reverse.

There are major platformers in this area, as well as different companies, consumers and other countless stakeholders whose interests are intertwined. As I mentioned in my opening remarks, priority areas differ from country to country, even though there is a common understanding on the WTO’s role in developing rules and maintaining a multilateral trading system. There are still differences in opinion on what approaches should be taken for specific ways of reforms, and as Chair, I felt that it is extremely important to make an effort to come to an agreement and to identify a common direction.

(Milliyet (Turkey), Didem Özer Tümer, Ankara Branch Manager)
Is it realistic to discuss WTO reform while some countries wield trade disputes and sanctions as political tools? How will the G20 work together on WTO reform in such a difficult environment?

(Minister MOTEGI)
That is a very good question.

The leaders at the G20 Osaka Summit agreed in principle such as free, fair and indiscriminate, which support free trade system, as the multilateral trading system is facing various challenges.

The G20 recognizes that the WTO, which is the cornerstone of the multilateral trading system, must be reformed to ensure that it is able to fully deal with the challenges in modern-day global trade precisely at a time when the trust in multilateral frameworks is undermined.

At this meeting, lively discussions were held to give momentum to WTO reform. Japan will continue to actively contribute to discussions in the G20 and other forums in order to help turn today’s discussions into action quickly.

(Minister MOTEGI)
Yesterday, I had bilateral meetings with a number of foreign ministers. Today, I have plans to meet with foreign ministers from the ROK, Germany and India. I would like to meet with ROK Foreign Minister Kang Kyung-wha and hear about yesterday’s decision of the GSOMIA by the ROK. I would also like to have a candid exchange of opinions on issues between Japan and the ROK, focusing on the issue of former civilian workers from the Korean Peninsula which is a fundamental matter between the two countries.

(Radiotelevisione Italiana, Aniello Puorto, Chief reporter, Radio 2)
I would like to ask about Africa. Japan is investing heavily in Africa. From Japan’s perspective, why is Africa so important?

(Minister MOTEGI)
The African continent is home to 54 countries, has a population of 1.3 billion and occupies 22% of the area of the globe. I believe this high potential provides an opportunity not only for Africa’s own development, but also for the Japanese economy and companies. Africa also has a significant power to mold international opinion in multilateral diplomacy, such as at the UN. However, at the same time, the African continent still faces issues concerning poverty and development, as well as peace and stability.

Based on this situation in Africa, TICAD7 which was held in August confirmed the importance of continued support for development in Africa and of backing Africa’s development by promoting private investment. At this G20 Foreign Ministers’ Meeting, participants shared a broad awareness about the importance of promoting private investment to encourage sustainable growth in Africa. This opinion was shared by many countries.

Japan will continue to focus on helping to improve the business environment in Africa and expand private investment on the continent using ODA.

(Minister MOTEGI)
Honestly, I was really impressed by the level of English spoken by high school students in Japan recently. I believe the other G20 foreign ministers felt the same as well.

The local high school students presented a proposal on eliminating the educational gap. I think the proposal was a unique and novel idea as a solution to the global shortage of teachers, such as distance learning using IT and sharing knowledge across borders.

I believe the foreign ministers in attendance listened eagerly to the suggestions made in English by the local high school students and that this, as well as the contents of the proposal, were well received.