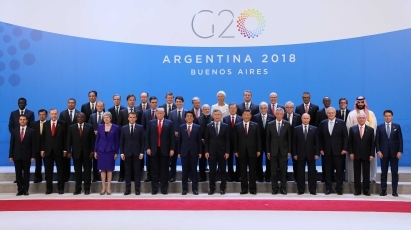 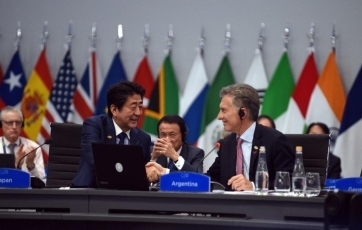 Photograph of the Prime Minister attending the closing session
with the President of Argentina (Photo: Cabinet Public Relations Office)

The main theme of the G20 Buenos Aires Summit was "Building Consensus for Fair and Sustainable Development" and based on this theme the leaders held frank exchanges of views on topics such as how the G20 will maintain unity and strengthen economic growth while facing some of the key risks, including financial vulnerabilities in emerging economies. G20 Leaders' Declaration was adopted.

At the retreat session for a high-level, frank exchange on the "Global Opportunities and Challenges in the Next Decade (e.g., artificial intelligence [AI], robotics)" (G20 members and Spain only), Prime Minister Abe as a lead speaker led the discussion. In his remarks, Prime Minister Abe advocated that new technological advancements have the potential to find solutions to social issues, such as aging population and environmental issues, and all people need to acquire literacy for mastering emerging technologies including AI. In addition, the Prime Minister stated that securing the free flow of data generates new values and innovation, and expressed his determination to continue the discussion in the lead-up to next year's G20 Osaka Summit and to lead rulemaking in the new era.

The G20 is the premier forum for international economic cooperation, and at Session 1, "Putting People First," which dealt with the world economy - the most important challenge facing the G20, Prime Minister Abe once again made remarks as a lead speaker. The Prime Minister stated that a free and open economy is the cornerstone of peace and prosperity and that Japan, as a flag bearer for free trade, strongly promotes the enhancement and improvement of the rules-based multilateral trading system and economic partnership agreements. The Prime Minister advocated that protectionism and exchanges of trade restrictive measures do not benefit any country and that the G20 leaders should encourage discussion on WTO reform. Furthermore, the Prime Minister stated that in order to promote free and fair economic rules, a level playing field must be secured for the removal of support measures such as market-distorting subsidies, including addressing the steel excess capacity issue. In this regard, the Prime Minister underscored the importance of creating a "virtuous cycle of growth and distribution" that simultaneously achieves economic growth and disparity reduction, promoting the Sustainable Development Goals (SDGs), and tackling climate change. The Prime Minister gained the support of the participating countries and fulfilled a proactive role while steering the flow of the overall discussion at the Summit.

At Session 2, "Building Consensus (international trade, international financial and tax systems)," Mr. Taro Aso, Deputy Prime Minister and Minister of Finance, delivered remarks on behalf of Prime Minister Abe. The Deputy Prime Minister stressed that the G20 has a responsibility to demonstrate political will towards resolving the current trade situation and urged the need to address market-distorting measures as they constitute the root cause of the situation. In addition, he called for providing political support to WTO reform. The Deputy Prime Minister also touched upon the G20's role in strengthening the Global Financial Safety Net and countering tax avoidance and evasion, including the Base Erosion and Profit Shifting (BEPS) Project. He stated that in addition to these initiatives, the G20 should address urgent issues including excess capacity, excessive global imbalances, taxation of economic digitalization, and debt of low income countries.

At Session 3, "Embracing the Opportunities," Japan's sherpa (Representative of the Government of Japan Koji Tomita) made remarks on behalf of Prime Minister. He stated that quality infrastructure investment that Japan prioritizes achieves sustainable economic growth and strengthens connectivity as well as stimulates the flow of people and goods. He stated that at next year's G20 Summit, Japan intends to prioritize elements of quality infrastructure such as openness, transparency, economic efficiency in view of life-cycle cost, and fiscal soundness of the recipient country, and upgrade them as international standards for quality infrastructure investment.

As Japan assumes the G20 presidency following the conclusion of the Buenos Aires Summit, at the closing session Prime Minister Abe presented priority issues looking ahead to the G20 Osaka Summit in June 2019 and expressed the determination of Japan as the next G20 presidency. The leaders expressed their endorsement.

2. Main Outcomes of the Summit

Through Prime Minister Abe's remarks at the plenary sessions as well as bilateral meetings with other leaders and Japan's efforts for the preparatory meetings, Japan as the next G20 presidency has been actively engaged in coordinating different positions and views within the G20 based on the flow of the discussion, and contributed significantly to sending the G20's unified strong message through adopting the Leaders' Declaration. The main points in the Leaders' Declaration are as follows.

At the closing session, Prime Minister Abe assumed the G20 presidency from President Macri, and expressed his determination for the G20 Summit to be held in Osaka from June 28 to 29 of next year.

Prime Minister Abe stated that, as countries that lead the world economy, the G20 has a responsibility to discuss global issues and find solutions to them. He hoped that the Osaka Summit in June 2019 can promote the achievement of a free and open, inclusive and sustainable future society by driving world economic growth through promotion of free trade and innovation, and contributing to the simultaneous achievement of economic growth and disparity reduction and to addressing development and global issues with a focus on the SDGs.

The Prime Minister noted that Japan is a country with advanced solutions to issues G20 members are facing today such as aging population as well as energy and environmental issues, and that Japan intends to lead the initiatives for overcoming the challenges that many countries will share in common. The Prime Minister expressed his intention to promote discussion towards using emerging technologies such as AI and robots to achieve a human-centered future society that simultaneously realizes economic growth and solves social issues as well as a society in which everyone can play an active role including women, young people, the elderly, and persons with disabilities.

In addition, Prime Minister Abe stated that Japan would continue to take up the topic of "infrastructure for development" which was an Argentine priority. He hoped that the G20 Summit can promote the strengthening of connectivity through quality infrastructure that Japan has advanced, as well as the provision of international public goods essential for global economic growth such as global health. In the area of energy and the environment, the Prime Minister underlined the idea of proactively attracting private investment to create a virtuous cycle of environmental protection and economic growth, rather than choosing one or the other. He looked forward to constructive discussion on the G20's contribution to global issues, including climate change and marine plastic litter.