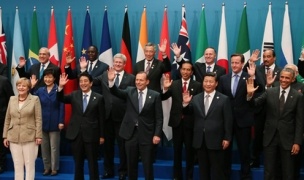 Strengthening growth and creating jobs was positioned as the top priority of this Summit, and the leaders conducted a frank exchange of views on specific actions to achieve this. The G20 Leaders’ Communique was adopted at the Leaders’ Summit’s conclusion.
Additionally, along with the Leaders’ Communique, the “Brisbane Action Plan” for lifting the collective GDP level of the G20 by at least an additional 2% by 2018 and a “Comprehensive Growth Strategy” for each of the G20 countries was announced. Moreover, with regards to the urgent issue of the Ebola outbreak, a G20 Leaders’ Statement was delivered on the first day of the Summit.
Overviews of the discussions on each topic are as follows:

It was reaffirmed that the Ebola outbreak poses a serious threat to international peace and stability, and the view was shared that the international community will make a coordinated response. The G20 Leaders’ Brisbane Statement on Ebola was issued.