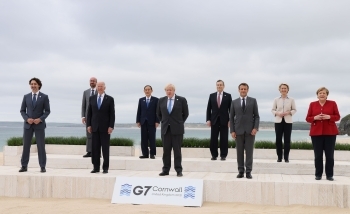 Photograph of the group photograph session
with the leaders of the G7 members
（Photo: Cabinet Public Relations Office） 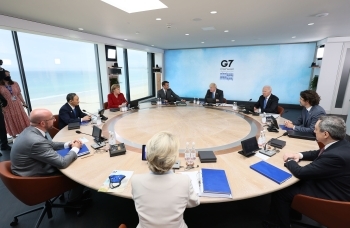 Photograph of the session on building back better
from the coronavirus pandemic
（Photo: Cabinet Public Relations Office） 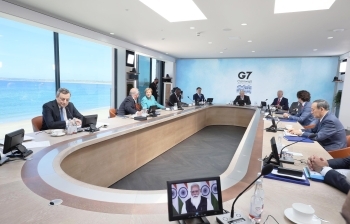 From June 11 to 13, Prime Minister SUGA attended the G7 Cornwall Summit held in Cornwall, the United Kingdom. The overview of the meeting is as follows.

Deliverables on the occasion of the G7 Cornwall Summit are as follows:

） (issued by the UK as the G7 presidency)

） and
the "Cornwall Consensus"（English (PDF)

） issued by the Panel

3. Overview of the G7 Summit

(1) Brief overview of the meeting

The Cornwall Summit is the first in-person G7 summit since the beginning of the COVID-19 pandemic. The leaders confirmed that the G7 would collaborate to beat the COVID-19, build back better, and promote democratic and open economies and societies based on international cooperation and multilateralism.

Under the overall theme of "Build Back Better" set by the British Prime Minister Johnson (Chair of the summit), G7 leaders held candid discussions. Representatives of invited guest countries and international organizations joined the discussion on health including the current response to COVID-19, climate and nature, and open society.

At the end of the three-day discussions, the G7 Leaders' Communiqué, the three annexes, and other documents were issued.

(2) Outline of each agenda item

(I) Building Back Better

In this session, the G7 leaders discussed economic recovery and gender equality as indispensable factors to achieve ‘building back better.’

Prime Minister Suga stated that “green” and “digital” were two key factors in achieving ‘building back better,’ and that he put every efforts in implementing bold reforms in these two policy areas since he took office last autumn.

The Prime Minister emphasized the importance of promoting WTO reform, and multilateral trading system to achieve ‘building back better’ from COVID-19 crisis. He pointed out that the economic challenges such as market-distorting measures including industrial subsidies, digital protectionism, and theft of critical technologies were incompatible with fundamental values of the G7. He pointed out that vulnerabilities of critical supply chain mattered and underscored the need to work strategically in a collaborative manner among the G7 members to address the issue.

As a result of the discussion, the G7 shared the view on the need to mitigate risks on supply chains of critical items such as critical minerals and semiconductors to increase economic resilience.

Gender equality was one of the UK presidency’s top priorities. The G7 leaders had lively discussions and came to announce that the G7 would provide $2.75 billion support for the Global Partnership for Education (GPE).

In this session, the leaders discussed measures to achieve ‘building back resilient.’ The G7 leaders had extensive discussions from various aspects. During the discussion, some members including Japan mentioned China, and the G7 confirmed to continue discussions on collective approaches to non-market policies and practices that undermine the fairness and transparency of the global economy. The G7 also confirmed to call on China to respect human rights and fundamental freedoms, especially in Xinjiang and in Hong Kong, and to cooperate on global issues such as climate change and biodiversity. The G7 leaders remained seriously concerned about the situations in the East and South China Seas, and concurred that they strongly opposed any unilateral attempts to change the status quo and increase tensions, underscored the importance of peace and stability in the Taiwan Strait, and encouraged the peaceful resolution of cross-Strait issues.

Prime Minister Suga expressed serious concerns about the unilateral attempts to change the status quo in the East and South China Seas, the situation in Hong Kong, and the human-rights situation in Xinjiang, and raised the issue of practices that undermine free and fair economic systems. He also stated that it is necessary for the G7 to send a strong message regarding these matters. Prime Minister Suga also emphasized the need for the G7 to continue to work together to address geopolitical issues.

In this session, the G7 leaders discussed foreign policy issues that the international community are currently facing with.

Prime Minister Suga welcomed that not only Japan and the US, but other G7 countries also had strengthened their involvement in the Indo-Pacific region through concrete actions. The G7 confirmed their shared position to reiterate the importance of maintaining a free and open Indo-Pacific based on the rule of law. In addition, Prime Minister Suga highlighted the importance to cooperate with ASEAN to establish a free and open international order in the region. He also stated that G7 countries should support ASEAN’s centrality and unity and the ASEAN Outlook on the Indo-Pacific, and advance concrete cooperation in line with the Outlook.

The G7 members concurred on condemning the military coup and violence by the security forces in Myanmar in the strongest terms, calling for the immediate release of detained people. They also concurred on recalling the central role of ASEAN, welcoming the Five Point Consensus, and urging their swift implementation.

Prime Minister Suga stated that Japan would continue to use its own channels to address the Myanmar Military and urge them to make positive responses, including their constructive involvement in ASEAN efforts.

The G7 concurred on calling for the complete denuclearization of the Korean Peninsula and the verifiable and irreversible abandonment of North Korea's unlawful weapons of mass destruction and ballistic missile programs in accordance with all relevant UN Security Council resolutions. The G7 also concurred on calling on all states to fully implement these resolutions and their associated sanctions.

Prime Minister Suga led this session’s discussions as a lead speaker. The G7 recognized the need that at least 60% of global population must be vaccinated in order to end the pandemic in 2022, and that the G7 will intensify its action to save lives. The G7 reaffirmed its support for the Access to COVID-19 Tools (ACT) Accelerator, and welcomed the successful the COVAX AMC Summit co-hosted by Japan and co-chaired by Prime Minister Suga. The G7 members committed to share at least 870 million vaccine doses over the next year, and to support through finance and in-kind contributions equivalent to 1 billion doses.

Prime Minister Suga emphasized Japan’s efforts including the result of the COVAX AMC Summit, in which Japan announced to contribute 1 billion dollars in total, including an additional pledge of 800 million dollars, and secured well beyond the targeted funding of 8.3 billion dollars to secure the amount of "1.8 billion vaccine doses to protect 30% of the population of developing countries" that COVAX set out. The Prime Minister also introduced that Japan had provided vaccines to Taiwan, and Japan’s plan to provide around 30 million doses of vaccines manufactured in Japan to other countries and regions including through the COVAX Facility, when the circumstances allow, and at an appropriate time. Moreover, the Prime Minister stressed that Japan has been implementing approximately 3.1 billion dollars of assistance for developing countries to fight against COVID-19, and, with the latest pledge, the total amount of assistance would be approximately 3.9 billion dollars.

Lastly, Prime Minister Suga picked up the problem of malnutrition as one of the major issues caused by COVID-19. As a concluding remarks, the Prime Minister expressed Japan’s will to play a leading role in strengthening the global health system and achieving Universal Health Coverage (UHC) based on the concept of human security, including by hosting the Tokyo Nutrition for Growth Summit in December 2021.

The G7 leaders confirmed to promote G7’s fundamental values to the world as members of open societies, and had discussions on how to address the issues that the international community is facing.

Prime Minister Suga pointed out that the fundamental values were challenged by the problems which could threaten the basis of democracy such as internet shutdowns, ransomware and spread of disinformation. The Prime Minister underscored the need for international collaboration to address these issues.

In addition, Prime Minister Suga pointed out the importance of promoting Data Free Flow with Trust (DFFT) to utilize valuable data-driven technologies while properly protecting data. The Prime Minister also stressed that the countries which share fundamental values should make clear commitments to the Indo-Pacific region, and to promote concrete cooperation especially with ASEAN.

Sir David Attenborough gave a presentation at the beginning of this session. In response, the G7 leaders discussed topics such as climate change and biodiversity. As a result, the G7 leaders confirmed their commitments to efforts to achieve a net zero goal by 2050 at the latest as well as increased 2030 targets that each country had committed in line with the 2050 goal.

In addition, they concurred on achieving an overwhelming decarbonized domestic power systems in the 2030s and phasing out new direct government support for international carbon-intensive fossil fuel energy as soon as possible, with limited exceptions. Domestically, consistent with their Nationally Determined Contributions (NDCs) and net zero commitment, the G7 leaders concurred on rapidly scaling-up technologies and policies that further accelerate the transition away from unabated coal capacity. The G7 leaders also committed to an end to new direct government support for unabated international thermal coal power generation by the end of this year.

Prime Minister Suga emphasized that climate had been a top priority in his administration and demonstrated his determination to realize carbon neutrality by 2050 and his will to promote innovation utilizing Japan’s technological capabilities as well as efforts in each region in Japan. The Prime Minister stressed that not only the ambitious goals set by developed countries, it is important to demand other countries, especially major emitters, to make further efforts. In this regard, Prime Minister Suga stated that Japan would comprehensively support developing countries for realistic transitions toward a decarbonized society by utilizing various energy sources and technologies according to each country’s circumstances. Furthermore, Prime Minister Suga announced that, as developing countries that genuinely need assistance should be supported, Japan would provide assistance which amounts to 6.5 trillion yen over the next 5 years from 2021 to 2025, including further enhancement of assistance for adaption. The G7 as a whole has also committed to increasing and improving their overall international public climate finance contributions by 2025.

During the discussions on biodiversity, the G7 adopted the “G7 2030 Nature Compact” to support the global mission to halt and reverse biodiversity loss by 2030. In the Nature Compact, the G7 committed to conserving or protecting at least 30% of its national land and ocean by 2030 according to national circumstances and approaches, as well as to accelerate actions based on the Osaka Blue Ocean Vision, to tackle the increasing levels of plastic pollution in the ocean.