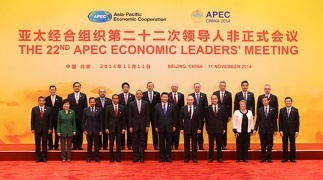 Commemorative photo (taken by the representative photographer) (Photo: Cabinet Public Relations Office)
The 22nd APEC Economic Leaders’ Meeting was held in Beijing, China on November 10 and 11, with Prime Minister Shinzo Abe representing Japan. Under the chair of H.E. Mr. Xi Jinping, President of the People’s Republic of China, and on the theme of “Shaping the Future through Asia-Pacific Partnership,” the leaders looked back on the 25 years of APEC strides thus far, while discussing “Advancing Regional Economic Integration,” “Strengthening Comprehensive Connectivity and Infrastructure Development,” and “Promoting Innovative Development, Economic Reform and Growth” as challenges that should be tackled going forward.
As outcomes of the meeting, “The 22nd APEC Economic Leaders’ Declaration - Beijing Agenda for an Integrated, Innovative and Interconnected Asia-Pacific” and the “Statement on the 25th Anniversary of APEC - Shaping the Future through Asia-Pacific Partnership” were issued.

Schedule of the Leaders’ Meeting

1. Outline of the Leaders’ Meeting

(2) Working lunch: “Strengthening Comprehensive Connectivity and Infrastructure Development” and “APEC’s achievements and prospect on the occasion of its 25th anniversary.”

A dialogue was held between the APEC leaders and APEC Business Advisory Council (ABAC) members from each economy. In response to a question from ABAC members, Prime Minister Abe explained the “Growth Strategy” of Abenomics, and explained Japan’s view on principles we should respect such as “quality of infrastructure” when we develop infrastructure.

3. Evaluation of the meeting