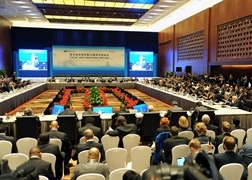 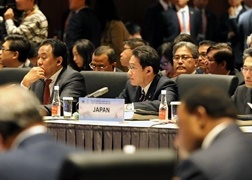 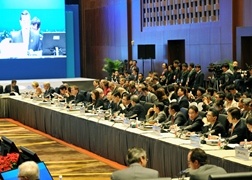 On November 7 and 8, the Asia-Pacific Economic Cooperation (APEC) Ministerial Meeting (chaired by Mr. Wang Yi, Foreign Minister of the People’s Republic of China, and Mr. Gao Hucheng, Minister of Commerce of the People’s Republic of China) was held in Beijing, the People’s Republic of China, and foreign ministers and ministers responsible for trade from 21 countries and regions participated in the meeting (Mr. Fumio Kishida, Minister for Foreign Affairs, and Mr. Yoichi Miyazawa, Minister of Economy, Trade and Industry, attended the meeting from Japan). Under the theme of the 2014 Beijing APEC “Shaping the Future through Asia-Pacific Partnership,” the participants exchanged opinions on a wide range of fields such as “Advancing regional economic integration,” “Promoting innovative development, economic reform and growth,” and “Strengthening comprehensive connectivity and infrastructure development.” As a result of the meeting, a “Joint Ministerial Statement (see gist[PDF]

)” was released. An overview of the discussion is as follows:

1. Results of 25 years of APEC and future roles

3. Cooperation in the fields of sustainable development, disaster risk reduction, and women and economy