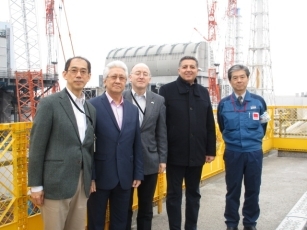 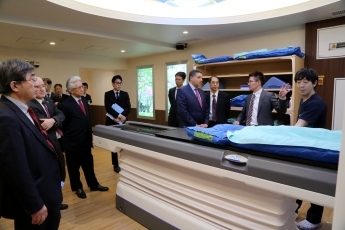 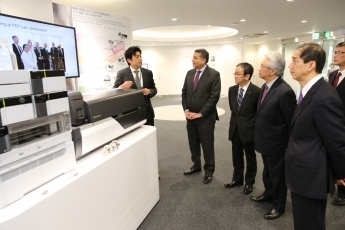 The showroom of Shimadzu Corporation
1 Three Governors (the Arab Republic of Egypt, the Republic of Indonesia, the United Kingdom of Great Britain and Northern Ireland) of the International Atomic Energy Agency (IAEA) visited Japan from February 17 to 23 at the invitation of the Ministry of Foreign Affairs.
2 This invitation is one of Japan continued efforts to promote further deepening of the international community’s understanding of advanced efforts related to peaceful use of nuclear energy in Japan, in particular, Japan’s efforts mainly through health care and medical applications of radiation and its efforts following the accident at the Fukushima Daiichi Nuclear Power Station.
3 The delegation paid a courtesy call on Parliamentary Vice-Minister for Foreign Affairs Kiyoto Tsuji and exchanged views with experts related to the peaceful use of nuclear energy. The delegation visited the following facilities:
(1) Takasaki Advanced Radiation Research Institute of the National Institutes for Quantum and Radiological Science and Technology (QST);
(2) Heavy ion radiotherapy facilities for cancer treatments at Gumma University and Hidaka Hospital;
(3) The showroom of Shimadzu Corporation (the corporation signed a Memorandum of Cooperation with the IAEA in October 2017 and donated its mass spectrometry equipment to the IAEA Laboratories in Seibersdorf).
In addition, the delegation visited the Fukushima Daiichi Nuclear Power Station and the TEPCO Decommissioning Archive Center and observed the sites of the reactor decommissioning, contaminated water management and other efforts that Japan has undertaken.
(Note: The IAEA promotes the peaceful uses of nuclear energy as one of its major goals, and has carried out technical cooperation activities for developing countries in a variety of fields. There has been a growing interest among developing countries in health care and medical applications of radiation.)

Page Top
Back to Atomic Energy