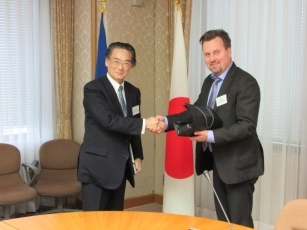 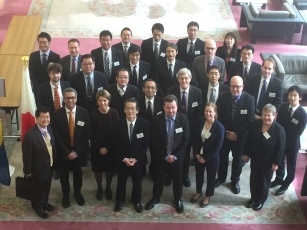 The Joint Committee Meeting (JCM) was held with participation of high-level representatives from a wide range of ministries, funding agencies and research institutions from both countries and the Embassy of the Sweden in Japan (EOS), prior to the visit of the Swedish Royal Technology Mission led by H.M. King Carl XVI Gustaf to Japan from February 16 to 20.

In the JCM, both sides introduced current situation and exchanged views on the recent development in science, technology and innovation (STI) policies and key thematic areas of cooperation such as “Life Science (focusing on anti-microbial resistance)”, “Aging Society”, “Environment/Agriculture, Forestry and Climate Change” and “Polar Research”; and “Framework for STI Cooperation” as well as specific agenda “Public & Academic Outreach”

In the discussion on the Recent Development in STI Policies, both sides emphasized the importance of STI policies as a backbone to realize sustainable growth and highlighted high ambitions of governments for innovation performance in both countries.

Regarding Life Science, Japan Agency for Medical Research and Development (AMED) and Swedish Research Council (SRC) brought forward the issue of anti-microbial resistance (AMR), on which a European initiative is currently on-going. Both sides emphasized the importance of research on this matter and will keep contributing in this field through this initiative, taking into account the international attention on this theme.

In the area of Aging Society, both sides welcomed the progress made by Japan Science and Technology Agency (JST) and The Swedish Governmental Agency for Innovation Systems (Vinnova) where they are preparing new joint calls based on MOU aiming at tackling the issues of our aging societies by combining expertise and resources of academia and industry in both countries in order to stimulate innovations with the potential to make community design and services better adapted to the needs of elderly people.

Environment/Agriculture, Forestry and Climate Change is a continuing agenda from past JCMs, and in concord with the broad scope of interests represented by the Swedish Research Council for Environment, Agricultural Sciences and Spatial Planning (Formas), Japanese Ministry of Agriculture, Forestry and Fisheries (MAFF), Forestry and Forest Products Research Institute (FFPRI) and National Institute for Environmental Studies (NIES), both sides shared insights on their research policies, statistics and researches on biomass utilization and proposed potential areas of cooperation. Both sides also took note of the potentials in the areas of forest ecosystem research and smart city design for low carbon society toward the future.

On the agenda item of Polar Research, both sides appreciated collaborative activities between the National Institute of Polar Research (NIPR) and SRC with a particular focus on plasma physics in arctic atmosphere and geospace environment observation promoted by the European Incoherent Scatter Scientific Association (EISCAT). A consensus was reached to continue cooperation toward realizing the upgraded EISCAT_3D (The Next Generation European Incoherent Scatter Radar System) based on the great interests of scientists in both countries. The possibility of utilizing the Swedish research vessel icebreaker “Oden” was also proposed for the dialogue for the future cooperation by SRC.

Under the session on Cooperation Frameworks, both sides encouraged continuation of utilizing the programmes for the researcher exchange and international joint research projects based on the MOU provided by the Japan Society for the Promotion of Science (JSPS) and the Swedish Foundation for International Cooperation in Research and Higher Education (STINT), which contribute to foster the mobility of researchers and promote academic cooperation between highly qualified researchers of both countries.

Both sides also gave positive appraisal on the specific topic of Public & Academic Outreach with JSPS making a presentation on public outreach event “Nobel Prize Dialogue Tokyo” jointly hosted with Nobel Media AB, and EOS making a presentation on academic outreach event “Japan-Sweden University Presidents’ Summit”, both of which were held in 2015, and further addressed the holding of similar events to promote public and academic engagement in the field of STI.

Almost all of these key fields of cooperation were individually followed up by separate meetings held between relevant institutions which were held back to back to the JCM to further strengthening their collaboration.

Noting the extensive relations in the STI cooperation through this constructive JCM, the co-chairs reaffirmed the commitment of the both sides to intensifying cooperation in this field and expressed their hope for contributing to addressing global challenges by further expanding the future partnerships of our two countries with continuous exchanges of knowledge and expertise.