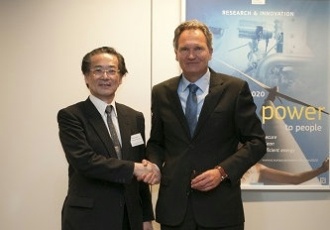 On 18 May 2015 in Brussels, Mr. Robert-Jan Smits, Director-General for Research and Innovation of the European Commission, and H.E. Makoto Katsura, Ambassador for Science and Technology Cooperation of the Ministry for Foreign Affairs of Japan, co-chaired the third meeting of the EU-Japan Joint Committee on Scientific and Technological Cooperation, organised under the EU-Japan Science and Technology Cooperation Agreement, which entered into force on 29 March 2011.
The Joint Committee Meeting was held with participation of a wide range of ministries and agencies from the European Commission and Japan.
At the beginning of the meeting, the co-chairs recalled the strategic importance of EU-Japan relations in the field of science and technology, to promote excellence of their research, increase the competitiveness of their industries, and effectively address common and global societal challenges.
Both sides first reviewed and noted the progress achieved since the 2nd Joint S&T Committee meeting in Tokyo in 2013 in the key areas of mutual interest of Information and Communication Technology (ICT), aeronautics and materials including Critical Raw Materials, and then presented recent developments of collaborative activities in some important areas with potential for future cooperation, such as health/medical research, environment, energy and high-energy physics.
Both sides subsequently discussed how to improve the framework of their cooperation, including through consultation on policies such as Open Science, setting up a scheme for the joint funding of research and innovation projects developed by the Japan Science and Technology Agency (JST), and furthering researcher exchange through a new Implementing Arrangement between the European Commission and the Japan Society for the Promotion of Science (JSPS).
Both sides also exchanged views on the support activities, such as the Horizon 2020 National Contact Point in Japan, the JEUPISTE project, and outreach activities to promote public engagement.
Finally, the Committee adopted a Joint Vision on the new strategic partnership in Research and Innovation between the European Commission and the Government of Japan, as attached.
The co-chairs confirmed that this Joint Vision will contribute to the 23rd EU-Japan Summit taking place on 29 May 2015. They confirmed that the date of the next Joint Committee Meeting would be coordinated through diplomatic channels.