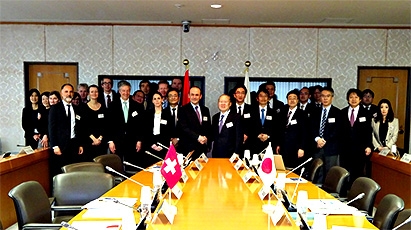 The Joint Committee meeting was co-chaired by Mr. Takeshi NAKANE, Ambassador for Science and Technology Cooperation, Ministry of Foreign Affairs of Japan and Mr. Mauro MORUZZI, Ambassador, Head of International Relations, State Secretariat for Education, Research and Innovation of Switzerland. The Joint Committee was held with the participation of representatives from the relevant ministries, funding agencies and research institutions of both countries.

The participants in the Joint Committee exchanged views on science, technology and innovation policies, international collaboration and related issues. Particular focus was given to new developments such as the Fifth Science and Technology Basic Plan of Japan and "Society 5.0" proposed therein, as well as the priorities in the "Dispatch on the Promotion of Education, Research and Innovation for 2017-2020" of Switzerland.

The Committee noted recent activities and the progress with the cooperation in the fields of disaster management, particle and nuclear physics, medical and welfare research, and materials science. Furthermore, Japan Society for the Promotion of Science (JSPS) and Swiss National Science Foundation (SNSF) signed a Memorandum of Cooperation regarding the introduction of a lead agency arrangement for their collaborative funding programs.

The Heads of delegations expressed their satisfaction noting that bilateral relations between Japan and Switzerland in the fields of research and innovation are close and excellent. Besides the activities under the bilateral programme, they underlined that direct collaborations between Japanese and Swiss research and higher education institutions are also extensive, as displayed during the Joint Committee meeting by the presentations of the delegation members. Both the Japanese and Swiss delegations reiterated their commitment to a further strengthening of the bilateral cooperation. The Heads of delegations saluted the foreseen meeting between Yoshimasa Hayashi, Minister for Education, Culture, Sports, Science and Technology of Japan and Mauro Dell’Ambrogio, State Secretary for Education, Research and Innovation of the Swiss Confederation due to take place on March 3, on the sidelines of the Second International Space Exploration Forum in Tokyo.

The Heads of delegations agreed that the next Joint Committee meeting should take place in Switzerland. The specific date of the meeting will be determined through the diplomatic channels.