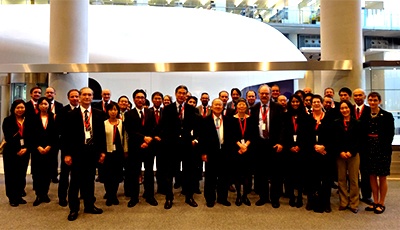 The Joint Committee was co-chaired by Sir Mark WALPORT, the United Kingdom Government Chief Scientific Adviser and Mr. Takeshi NAKANE, Ambassador for Science and Technology Cooperation of the Ministry of Foreign Affairs of Japan. Attendees included Dr. Yuko HARAYAMA, Executive Member of the Council for Science, Technology and Innovation of the Cabinet Office of Japan, and a range of other representatives from the UK and the Japanese governments and science agencies.

The Joint Committee exchanged views on science, technology and innovation policy, international collaboration and related issues; particular focus was given to new developments such as the developing Industrial Strategy in the UK as well as the Fifth Science and Technology Basic Plan in Japan and “Society 5.0” proposed in that plan.

The Committee also noted the recent development of new strategic collaborations between Japanese and UK organizations which would do much to facilitate future joint working on key themes, to the benefit of both countries. The Committee discussed in detail such areas as Muon research, health and life sciences; ocean and marine science; disasters and resilience; and the opportunities and challenges of a digital society.

The Committee welcomed progress being made in the area of health and life sciences, where a new memorandum of cooperation is being discussed between the Japan Agency for Medical Research and Development (AMED) and the Medical Research Council (MRC) of the UK, and also where preparations for opening a London office of AMED is proceeding. The Committee also welcomed developments in the area of Ocean Research, where the launching of a new joint call for collaborative research is under discussion by the Japan Science and Technology Agency (JST) and the Natural Environment Research Council (NERC) of the UK , and the exchanging of letters confirming the cooperation is being arranged between the Minister of Education, Culture, Sports, Science and Technology (MEXT) and the Secretary of State for Business, Energy and Industrial Strategy (BEIS). The impact of technology on society was a key theme and the Committee welcomed the initiative of the Royal Society in holding further discussions in the area of artificial intelligence, robotics and the internet of things. Further discussion highlighted developments in science, technology and innovation policy in each country; the continued strengthening of collaboration between the two countries; and future themes that Japan and the UK are considering for future research priorities.

Representatives from Japan and the UK reviewed the valuable research collaboration currently being undertaken between Japanese and UK research agencies, research institutes and universities and were pleased to note the high level and quality of this research.

It is clear that both countries have many shared interests and complementary strengths, and there are valuable opportunities for collaboration. In this context the Committee encouraged further efforts to make funding and collaboration information more easily available to researchers; to build closer collaboration between funding agencies; to continue discussion about aligning work in third countries; to build collaboration on disaster risk reduction and resilience, health and life sciences, ocean research, the implications of a digital society, and sharing information on horizon scanning activities.

It was proposed to hold the next Joint Committee meeting in Japan; the specific date of the meeting will be coordinated through diplomatic channels.

between Japan and the UK.

(Open a New Window)
Page Top
Back to Science and Technology