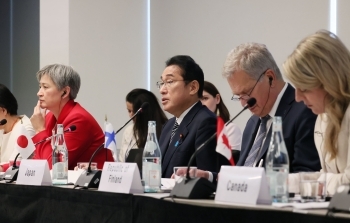 On September 21, commencing at 11:20 a.m. (local time, 22, 0:20 a.m., Japan time) for approximately 60 minutes, Mr. KISHIDA Fumio, Prime Minister of Japan, attended the High-level Meeting of the Friends of the Comprehensive Nuclear-Test-Ban Treaty (CTBT) during his visit to New York to attend the United Nations General Assembly. The summary of the meeting is as follows.

Prime Minister Kishida announced to hold this meeting in his general debate speech in August at the Tenth Review Conference of the Parties to the Treaty on the Non-Proliferation of Nuclear Weapons (NPT), and the meeting was held at the leaders level of the Friends of the CTBT for the first time.