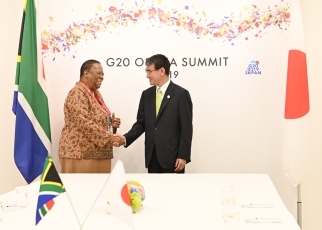 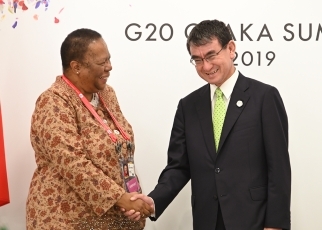 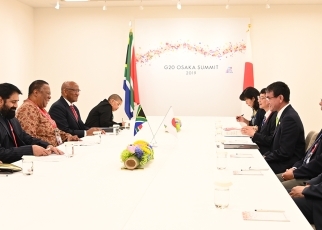 On June 29, commencing at about 11:35 a.m. for approximately 20 minutes, Mr. Taro Kono, Minister for Foreign Affairs of Japan, held a foreign ministers’ meeting with Hon. Dr. Naledi Pandor, Minister of International Relations and Cooperation of the Republic of South Africa, who is visiting Japan to attend the G20 Osaka Summit. The overview of the meeting is as follows.

1. Minister Kono welcomed Minister Pandor’s visit to Osaka and stated that aside from this visit, Japan expects Minister Pandor to visit Japan on the occasions of the seventh Tokyo International Conference on African Development (TICAD7), the Rugby World Cup as well as G20 Foreign Ministers’ Meeting this year. Minister Kono also stated that taking these opportunities, he would like to add further momentum to strengthen the bilateral relations. Minister Pandor stated that she will utilize her experience of interactions with Japan when she served as Minister of Education and Minister of Science and Technology to further enhance bilateral relations. Minister Pandor also stated that South Africa highly values Japan’s cooperation in the area of human resources development and expressed her expectation towards the enhancement of the Japanese Government Scholarship, especially in the area of science technology and engineering. Both ministers agreed to hold the Japan-South Africa Partnership Forum by the end of March next year, and to cooperate towards the success of TICAD7.

2. As to the G20 Osaka Summit, Minister Kono stated, “Japan places importance on international rule-making on digital economy and ‘Osaka Track’ was launched yesterday to promote such rule-making. We appreciate President Ramaphosa’s attendance at the Leaders' Special Event on Digital Economy which took place yesterday.” The ministers confirmed that they would cooperate towards the success of the G20 summit.

(Reference) Japan-South Africa Partnership Forum
The forum serves as intergovernmental consultation between Japan and South Africa since April 1998 when the leaders of both countries agreed on its establishment for the purpose of enhancing bilateral relations between the two countries. In principle, the forum is chaired by ministerial level and held actively on occasions of high-level visits between the two countries. Major agenda items include bilateral relations (economic cooperation, trade and investment, etc.), African development issues, and global challenges (United Nations, regional affairs, etc.).