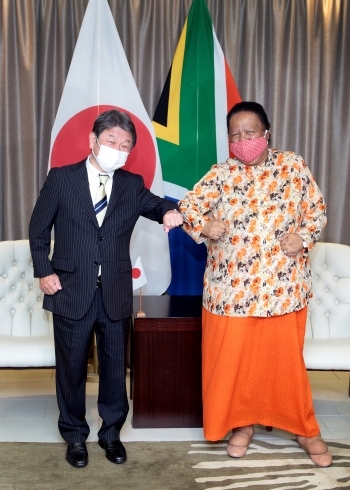 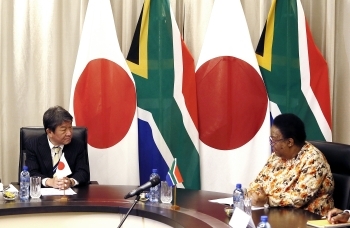 1. On December 12, commencing at around 11:00 a.m. (local time; 6:00 p.m. JST) for approximately two and a half hours, Mr. MOTEGI Toshimitsu, Minister for Foreign Affairs of Japan, who was visiting South Africa, held a Japan-South Africa Foreign Ministers’ Meeting and a working lunch with the Hon. Dr. Naledi Pandor, Minister of International Relations and Cooperation of the Republic of South Africa. The overview is as follows.

(2)Building on Japan’s history of cooperation in the field of health through TICAD, Minister Motegi stated that Japan has implemented supports for South Africa, which include the provision of medical supplies and support for improvement of crisis management capability and health and medical systems through international and regional organizations. Noting the importance of businesses in achieving economic recovery from the COVID-19 pandemic, Minister Motegi further shared the view with Minister Pandor that business activities of Japanese companies were gearing up to full operations, with most Japanese business people having returned to South Africa following the resumption of international commercial flights.
In response, Minister Pandor expressed her appreciation for Japan’s efforts and support. Minister Pandor also expressed her hope to further strengthen the Japan-South Africa business relations, including further investment into South Africa by Japanese companies. The Ministers also agreed to hold the Japan-South Africa Partnership Forum as early as possible while watching the situation of the COVID-19 pandemic.

(3)Minister Motegi stated that Japan hoped to collaborate and cooperate with South Africa to achieve a “free and open Indo-Pacific” from the viewpoints of the blue economy and pursuing economic prosperity. Both sides confirmed that Japan and South Africa would cooperate hand in hand to achieve a “free and open Indo-Pacific”. Looking ahead to TICAD8 to be held in Tunisia in 2022, both Ministers confirmed that the two countries would cooperate through the TICAD process.

(4)The Ministers exchanged views on the United Nations Security Council Reform, the situation of North Korea, the East China Sea and the South China Sea, and shared the view on continuing to cooperate closely. Minister Motegi also asked for understanding and cooperation toward the early resolution of the abductions issue, and obtained support from Minister Pandor.