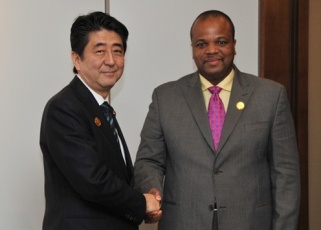 On March 14, commencing at 4:05 p.m. for approximately 15 minutes, Prime Minister Shinzo Abe held a meeting with His Majesty King Mswati III, King of the Kingdom of Swaziland, who is currently staying in Sendai in order to attend the Third UN World Conference on Disaster Risk Reduction. An overview of the meeting is as follows.

1. At the beginning, Prime Minister Abe welcomed the reunion with His Majesty King Mswati III since TICAD V, and expressed his desire to cooperate with His Majesty for the success of the UN World Conference on Disaster Risk Reduction, and to have His Majesty see the recovery of Sendai from the disaster. In response, His Majesty King Mswati III, expressing his gratitude for the invitation to the Conference, stated that it was a great decision to choose Sendai, an affected area, as a conference venue, and that the Conference would be a good opportunity to learn how Japan had responded to natural disasters.

2. Prime Minister Abe stated that he would like to help economic growth and poverty reduction in Swaziland, promote personnel exchange, and cooperate toward the next TICAD to be held in Africa in 2016. In response, His Majesty King Mswati III, expressing his gratitude for the wide range of support and cooperation from Japan, stated that he would like to hold close consultations toward their implementation and expressed his expectations for Japan to provide assistance concerning natural disasters in Swaziland. The two leaders also exchanged their views on the cooperation for the UN Security Council reform and other issues.

Page Top
Back to Japan-Eswatini Relations