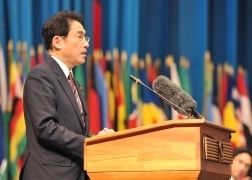 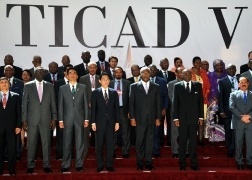 On May 4 (Sun) and 5 (Mon), Mr. Fumio Kishida, Minister for Foreign Affairs, attended and co-chaired the First TICAD V Ministerial Meeting in Yaounde, the Republic of Cameroon. The overview and evaluation of the meeting are as follows. Minister Kishida’s visit to Cameroon was the first-ever visit to the country by the Japanese Foreign Minister.

(1) A total of approximately 800 participants, with representatives from 52 African countries including 20 foreign ministers, donor countries and Asian countries, international organizations and regional organizations, as well as representatives from civil society such as private sectors and non-governmental organizations (NGOs), attended the meeting.
(2) This was the first ministerial meeting since the Fifth Tokyo International Conference on African Development (TICAD V) held in Yokohama last June and the first-ever TICAD Ministerial Meeting held in Central Africa since TICAD IV.
(3) Minister Kishida’s attendance to this meeting was the third attendance to the  TICAD-related meetings, following the TICAD V Ministerial Preparatory Meeting in Ethiopia in March 2013, and TICAD V last June. Minister Kishida co-chaired the meeting with H.E. Mr. Pierre Moukoko Mbonjo, Minister of External Relations of the Republic of Cameroon as the host country. Minister Kishida gave an address at the opening ceremony(English (PDF)

） and at the special session (“Empowering Women and Youth”)(English (PDF)

2. Results of the meeting

The overview and major results of each session are as follows:
(1) Plenary 1 (“Status of Implementation of the Yokohama Action Plan 2013-2017”)
In his keynote speech, Minister Kishida stated that the Government of Japan had implemented its assistance in 2013 faster than expected (USD 3.51 billion of official development assistance [ODA], which accounts for approximately 25% of Japan’s commitment at TICAD V, and USD 2.08 billion in other assistance) (Please refer to “TICAD V 2013: Progress with Japan’s Assistance Package” Fact Sheet(English (PDF)

）), and stressed that Japan would implement the assistance it had committed. Countries appreciated his statement and many countries expressed their gratitude for Japan’s assistance. At the same time, Minister Kishida stated that improvement of a freer and safer investment environment would be necessary for private-led African development. In this context, he requested more efforts by the African side, while announcing that the Government of Japan will extend USD 300 million of yen loan to the African Development Bank to foster private sectors in Africa. At the meeting, active discussions were made over measures and the progress for implementing the Yokohama Action Plan 2013-2017, and African countries expressed their expectation and requests to the Government of Japan. In the end, the plenary endorsed the following documents:
(A) The Implementation Matrix of the Yokohama Action Plan 2013-2017 (including cover and summary)
(B) The Guideline for the Annual Progress Report of TICAD V
(English／French (PDF)

）
In the Implementation Matrix, more than 600 activities and initiatives in total were submitted from 57 countries and organizations including Africa and Japan.
(2) Plenary 2 (“Agriculture, Food and Nutrition Security”)
Mr. Taku Eto, Senior Vice-Minister of Agriculture, Forestry and Fisheries, attended the session as a panelist and delivered a speech on the enhancement of cooperation for development of a value chain of African agricultural products. At this session, discussions were held regarding the methods to attract investment to agricultural sectors and empower potential bearers of agriculture, such as women and youth on the basis of a common recognition that agriculture, the largest economic sector in Africa, plays important roles for economic growth and reduction of poverty. In the same vein, participants also discussed the methods to protect vulnerable people who engage in agriculture..
(3) Plenary 3 (“Post-2015 Development Agenda”)
Minister Kishida attended the session as a panelist and emphasized the importance of economic growth for development, while proposing three “vitamins,” crucial elements for development that promote human security (comprehensiveness, sustainability and toughness). At the session, participants shared views on the necessity to further accelerate the progress toward achieving the Millennium Development Goals (MDGs) before 2015, the target year of the MDGs. Moreover, the participants welcomed the Common African Position (CAP) on the Post-2015 Development Agenda adopted by the African Union (AU), and shared their views that Africa and Japan would take initiatives toward development of the post-2015 development agenda.
(4) Special session (“Empowering Women and Youth”)
In his keynote speech, Minister Kishida stated that the Government of Japan would provide the assistance necessary for the empowering of women and youth to realize a “society in which African women shine” and a “bright future for African youth.” Ms. Rumiko Seya, President of the Japan Center for Conflict Prevention, delivered a speech as a panelist. In this session, necessary measures and callenges for empowerment of women and youth in development, business, and peacebuilding were actively discussed by African countries based on a common recognition that capacity development of women and youth directly leads to stability of African society as well as development and further industrialization in Africa.
Overviews of discussions in each session were released as Chair’s Summaries. The participants shared their views that they would work together in the future in the United Nations, G20 and other avenues in the international arena on the basis of the discussions at this Ministerial Meeting.

(1) In his second Africa visit, Minister Kishida showed that the Government of Japan has been steadily implementing assistance of Africa that the Government of Japan had committed at the TICAD V through both public and private means, amounting to 3.2 trillion yen at maximum, including 1.4 trillion yen of ODA.  Such engagement greatly contributed to increase the credibility of Japan’s diplomacy towards Africa and the TICAD process.
(2) The unanimous endorsement of the “The Implementation Matrix of the Yokohama Action Plan 2013-2017,” which compiled specific measures by both the African side and development partners including Japan, enabled the participants to share with the international community the outcome targets that the participants unanimously agreed at the TICAD V, and to deepen cooperation toward the realization of such targets.
(3) The three agenda discussed at the meeting (agriculture, post-2015 development agenda, and women and youth) are global issues that Africa prioritizes and that the entire international community should address. The cooperation on these fronts by the Government of Japan through the TICAD process is the implementation of its “proactive contribution to peace” policy based on the principle of international cooperation, which forms the basic principle of Japan’s diplomacy. Through this meeting, Japan was able to appeal its continuous contribution to the development and peace in Africa through its “proactive contribution to peace” policy.
(4) Through the Meeting of Concerned Countries on the Situation of South Sudan and bilateral talks held on the occasion of the meeting, the Government of Japan was able to convey its concerns over the situation in South Sudan, confirm coordination with major countries in response to the situation in South Sudan, and enhance relations with respective countries. Moreover, concerning the situation in the Central African Republic and in the Sahel region, the Government of Japan could convey its contribution in each bilateral talk and garnered their understanding towards Japan’s proactive contribution to the peace and stability of Africa.