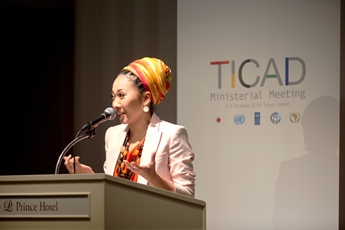 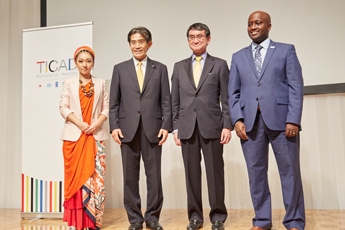 Speech by MISIA on 6th October 2018 at the occasion of TICAD Ministerial Meeting reception hosted by Mr. Taro Kono, Minister for Foreign Affairs

This is the seventh TICAD.
So, I' d like to talk about my seven encounters in Africa.

The first is the SOUL MUSIC.
African music is what has influenced me the most.

The second is the countries.
In 2007 I visited Kenya and since then I' ve been to many
countries. "Those who drink the water of Africa will
return", well, that is definitely me!

The third is the vibrant culture and fashion.

The fourth is the messages from the people.
It is said that "Wherever there is music, there is never
any fighting".
Singing together is a prayer for peace.

The fifth is the children and education.
I' ve been supporting education for eleven years.
A girl once told me, "I learned a lot. It can' t be stolen."
Learning is an asset.

The sixth is the power of the music.
I' d like to do a live show with the theme of Africa.
I' m the chair of a group called mudef,
the "MUSIC DESIGN FOUNDATION". I believe that we
can make a better society through music and art.

And the seventh is TICAD.
There is an Africa proverb, "Mountains don' t meet,
people do", I think this is the message that we are
meeting and building relations.

Life is going on and on.
I trust that our TICAD meeting will lead us to a great future!