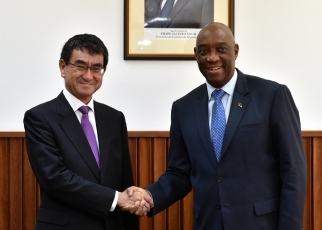 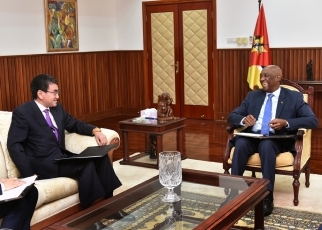 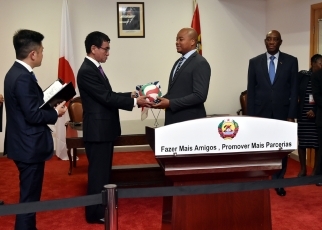 On August 24, commencing at 2:06 p.m. for around 30 minutes, Mr. Taro Kono, Minister for Foreign Affairs, who was visiting Maputo, the Republic of Mozambique, to attend the Tokyo International Conference on African Development (TICAD) Ministerial Meeting, held a Japan-Mozambique Foreign Ministers’ Meeting with H. E. Mr. Oldemiro Júlio Marques Baloi, Minister of Foreign Affairs and Cooperation of Mozambique. The overview of the meeting is as follows.

1. At the beginning, Minister Kono expressed that he is delighted to visit Mozambique for the first time as Minister for Foreign Affairs of Japan on the occasion of the 40th anniversary of the establishment of diplomatic relations between Japan and Mozambique.

2. Minister Kono also referred to the two Japanese grant aid projects extended to Mozambique, namely, the Economic and Social Development Programme (1.5 billion yen) and the Project for Emergency Rehabilitation of Transmission Network (approximately 1.4 billion yen), of which the signing ceremony of the Exchange of Notes took place after the meeting. Minister Kono stated that Japan intends to continue its support to the development efforts made by the Government of Mozambique through grant aid and technical cooperation. In response, Minister Baloi expressed his appreciation.

3. In addition, Minister Kono also mentioned Japan’s donation of volleyballs as a part of its Sport for Tomorrow program, and expressed expectation that the contribution would assist the promotion of sports in Mozambique in the run-up to the Olympic and Paralympic Games Tokyo 2020.