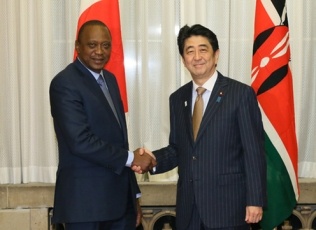 On March 13, commencing at 7:35 p.m. for approximately one hour, Prime Minister Shinzo Abe held a working dinner with H.E. Hon. Uhuru Kenyatta, President of the Republic of Kenya, during his visit to Japan. An overview is as follows.

1. At the outset, Prime Minister Abe welcomed President Kenyatta’s first visit to Japan since his appointment as President, and his participation in the UN World Conference on Disaster Risk Reduction, and expressed his expectation that the relationship between Japan and Kenya will develop further.

2. In response, President Kenyatta expressed his gratitude for the warm welcome from the Japanese side, and his expectation over the discussions at the UN World Conference on Disaster Risk Reduction. President Kenyatta also extended his sympathies to those who suffered as a result of the Great East Japan Earthquake. Additionally, President Kenyatta said he wants to take this opportunity to reaffirm the friendly bilateral relationship and to promote the partnership.

3. Prime Minister Abe mentioned that Kenya is the biggest ODA partner country in Sub-Saharan Africa, and said he wants to contribute to projects for the development of Kenya, including the Mombasa Port Development Project, and build a win-win relationship, based on public-private cooperation. Prime Minister Abe also conveyed plans to promote the ABE Initiative, and grant health sector policy loans in order to achieve universal health coverage, which is the very first in the world.

4. President Kenyatta expressed his appreciation and high evaluation for Japan’s support in various fields since Kenya’s independence. President Kenyatta also explained that Kenya has a large population of young people, and considering Japan as a model it intends to move ahead with development in a broad range of fields, including ports and other infrastructure, energy, education and marine resources.

5. The two Premiers discussed the next TICAD summit meeting and also shared the view that the two countries will strengthen cooperation on UN Security Council reform. They also agreed on further strengthening the relationship between the two countries in a variety of fields, including the fight against terrorism.