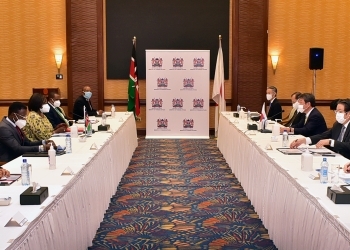 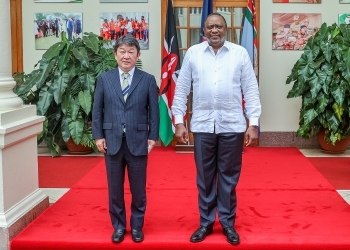 Courtesy Call on H.E. Mr. Uhuru KENYATTA,
President of the Republic of Kenya 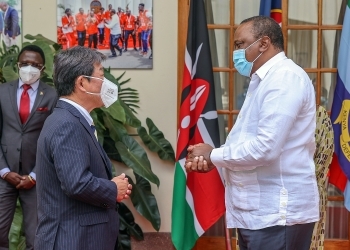 Courtesy Call on H.E. Mr. Uhuru KENYATTA,
President of the Republic of Kenya

On January 13, commencing at around 9:30 a.m. local time (3:30 p.m. JST) for approximately an hour and fifteen minutes, Mr. MOTEGI Toshimitsu, Minister for Foreign Affairs of Japan, who was visiting Kenya, held a Japan-Kenya Foreign Ministers’ Meeting with Ambassador Raychelle Awuor OMAMO, Cabinet Secretary, Ministry of Foreign Affairs of the Republic of Kenya. Following the meeting, Minister Motegi paid a courtesy call on H.E. Mr. Uhuru KENYATTA, President of the Republic of Kenya from 11:30 a.m. local time (5:30 p.m. JST) for approximately 30 minutes. The overview of these meetings is as follows.

(1) At the outset, Ambassador Omamo welcomed Minister Motegi and stated that Japan was a strategic partner who shared fundamental values and that she hoped to further deepen the relations with Japan in various fields. In response, Minister Motegi stated that he was pleased to meet Ambassador Omamo again following their meeting in October last year and that he hoped to cooperate to achieve a “Free and Open Indo-Pacific”, to strengthen business relations looking ahead to post-COVID19 and to collaborate toward the 8th Tokyo International Conference on African Development (TICAD8).

(2) Minister Motegi stated that Japan had actively offered support for the measures against COVID-19 pandemic, which was built upon Japan’s history of cooperation in the field of health through the TICAD process and that he hoped that medical devices to be provided to Kenya would be utilized effectively. In response, Ambassador Omamo expressed her deep gratitude for Japan’s efforts and supports.

(3) Minister Motegi stated that, subject to the situation of the COVID-19 pandemic, he intended to hold the Third Japan-Kenya Business Dialogue to support the activities of Japanese companies in Kenya, and expressed his hope that the Government of Kenya would undertake measures to improve business environment. In response, Ambassador Omamo expressed her hope that Japanese companies would increase investment in Kenya and stated that the Government of Kenya would work to improve business environment in the country.

(4) Minister Motegi elaborated on the vision of a “Free and Open Indo-Pacific” and emphasized the importance of cooperation with Kenya, of which the Mombasa Port connected inland African countries to the Indian Ocean, and further to the Pacific. In response, Ambassador Omamo stated that Kenya would cooperate to achieve a “Free and Open Indo-Pacific” together including from the viewpoint of developing blue economy, to which Kenya attached importance.

(5) Looking ahead to TICAD8 to be held next year, Minister Motegi stated that Japan would strongly support African-led development. The Ministers shared the view on pushing ahead with cooperation through the TICAD process.

(6) The two Ministers exchanged views on the situations of the Horn of Africa, North Korea, the Republic of Korea and the East and South China Seas, as well as the United Nations Security Council reform and shared the view on reinforcing cooperation. Minister Motegi also asked for understanding and cooperation toward the early resolution of the abductions issue and obtained support from Ambassador Omamo.

2 Courtesy Call on H.E. Mr. Uhuru KENYATTA, President of the Republic of Kenya

(1) At the outset, President Kenyatta welcomed Minister Motegi for visiting from Japan, which had a long history of partnership with Kenya, at this point of time and stated that he hoped to further strengthen bilateral relations and cooperation in the international arena. In response, Minister Motegi expressed his pleasure to visit Kenya as the final destination of his visit to Africa and stated that Japan would continue to cooperate with Kenya, a prioritized country for the promotion of Universal Health Coverage, in the field of economic and social development including measures to address the COVID-19 pandemic. President Kenyatta also expressed his strong appreciation for Japan’s cooperation with Kenya since its independence, which encompassed a wide range of areas of development such as economy, human resources, health care, society, industry, infrastructure, or ports.

(2) Minister Motegi stated that Japan attached importance to the development of the Mombasa port as a good example of quality infrastructure development and that he hoped to cooperate to improve infrastructure around the Mombasa Port area and basic infrastructure in the Mombasa Special Economic Zone. Minister Motegi also conveyed his intention to support Japanese companies with business operations in Kenya through the Third Japan-Kenya Business Dialogue. In response, President Kenyatta welcomed that Japanese companies’ businesses in Kenya, and stated that he hoped to see further expansion of investment and to cooperate with Japan from the perspectives of accelerating development of Mombasa Special Economic Zone and blue economy.

(3) Noting that a “Free and Open Indo-Pacific” was originally introduced at the 6th Tokyo International Conference on African Development (TICAD VI), the first TICAD summit meeting held in Africa, Minister Motegi stated that he would cooperate closely with Kenya, where the vision was set out. President Kenyatta stated that Japan could depend on Kenya as a partner in the efforts to achieve a “Free and Open Indo-Pacific.”

(4) Both sides shared the views on pushing ahead with cooperating in areas including bilateral economic cooperation, human resources development, a “Free and Open Indo-Pacific” and blue economy, TICAD8 to be held next year, peace and stability in the Horn of Africa, North Korea including the abductions issue, and the United Nations Security Council reform.