The Banquet Hosted by the Prime Minister of Japan 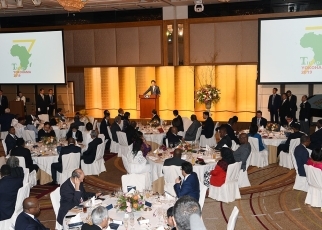 1. On August 29 from around 19:00 for approximately 100 minutes, Mr. Shinzo Abe, Prime Minister of Japan, hosted a Banquet at the Yokohama Royal Park Hotel for the Head of States who came to Japan for the TICAD 7. Mr. Taro Aso, Deputy Chairman, Mr. Taro Kono, Minister of Foreign Affairs and others assisted this Banquet.

2. During his opening speech, Prime Minister Abe again welcomed the Head of States and mentioned that he feels that Africa has largely progressed and further developed its brilliance during these three years since TICAD VI.

3. He also mentioned that, for this Banquet, Occidental dishes with Japanese essences by making extensive use of specialties from different regions of Japan were prepared, and that special Sake from all over Japan were selected for each dish.

4. The dishes have been carefully decided by the Commission on the Banquet Menu composed of specialists. Vegetarian and halal menu options were prepared to meet the various dietary needs based on religious beliefs and preferences of the guests, and menu books with in multiple languages were provided.

5. The Banquet was an ideal opportunity to demonstrate the attraction of Japanese culinary culture to the African countries, and ended in a friendly atmosphere.