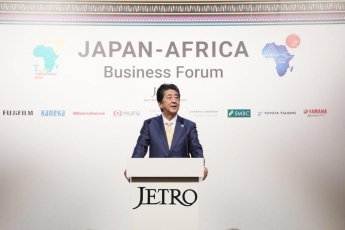 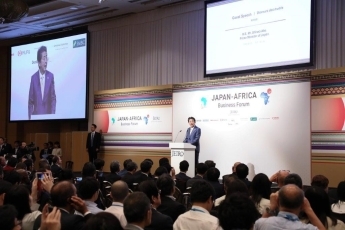 1. On Thursday, August 29, commencing at 13:00 for about 20 minutes, Mr. Shinzo Abe, Prime Minister of Japan, attended the Japan-Africa Business Forum, one of the side events of the Seventh Tokyo International Conference on African Development (TICAD7).

2. In his opening remark (English (PDF)

), Prime Minister Abe expressed his intention that the Government of Japan will support the expansion of the Japanese companies in Africa through efforts of the Japan Business Council for Africa among others, and also called upon African governments and private sectors to deepen their understanding on characteristics and advanced technologies of Japanese companies, and to establish long-term partnerships with them.

3. Furthermore, during this Forum, a ceremony to commemorate a total of 110 memorandums of understanding (MOUs) being signed on the occasion of TICAD 7 between 37 Japanese companies and 5 organizations and 26 African countries and others was conducted in the presence of H.E. Mr. Emmerson Dambudzo Mnangagwa, President of the Republic of Zimbabwe, Mr. Hiroshige Seko, Minister of Economy, Trade and Industry, and Mr. Masahisa Sato, State Minister for Foreign Affairs.