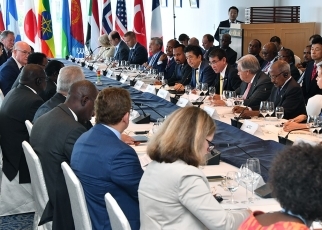 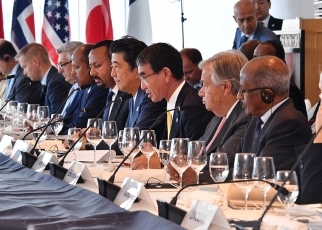 1. Prime Minister Shinzo Abe attended the Special Conference on Peace and Stability in the Horn of Africa and the Neighboring Region held at 11.30 am on August 29 (Thursday) and had a speech (English (PDF)

2. At the outset, following the speech (English (PDF)

) of Minister Kono, Prime Minister Abe commended the movements of peacebuilding initiated by Africa such as starting off with the peace deal with Ethiopia and Eritrea. Prime Minister Abe expressed his sincere respect for the long-standing contribution of the international community. He expressed that Japan will support improving ‘connectivity’ through the provision of high quality infrastructure in the region, and peacebuilding by the Africa’s own initiative.

3. President Mohamed, of Somalia, Prime Minister Abiy of Ethiopia, Vice President Igga of South Sudan and Ministers from the Horn of Africa and the Neighboring Region shared the challenges currently facing and areas where assistance is needed. They exchanged opinions with the partner countries and international organizations on how best the region could be supported.