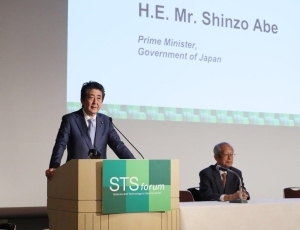 1. On Wednesday, August 28th, commencing at around 1:30 p.m. for approximately 15 minutes, Mr. Shinzo Abe, Prime Minister of Japan, attended the STS Forum TICAD7 Africa-Japan Workshop for Strengthening Cooperation in Science, Technology and Innovation, which was held by the Science and Technology in Society (STS) forum in Yokohama, and delivered an address.

2. In his address, Prime Minister noted the important role that science and technology played in the history of Japan’s modernization, while expressing that science, technology and innovation as well as human resource development have tremendous meaning particularly in Africa, a continent, which has the biggest potential on earth.

(Reference)
This side event was held by the Science and Technology in Society (STS) forum from 1:25 p.m. to 5 p.m. The main attendees were Mr. Yasutoshi Nishimura, Deputy Chief Cabinet Secretary, Mr. Matamela Cyril Ramaphosa, President of the Republic of the South Africa, Dr. Akinwumi Ayodeji Adesina, President of the African Development Bank Group, Mr. Koji Omi, Founder and Chairman of STS forum and Ms. Asako Omi, Member of the House of Representatives (Secretary General of STS forum).