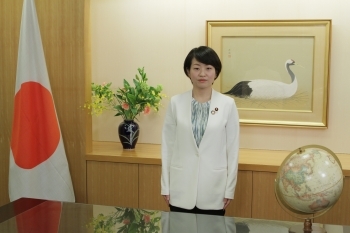 Ms. SUZUKI Takako, State Minister for Foreign Affairs of Japan, delivered a video message at a virtual event on the occasion of Africa Day arranged by the Embassy of the Republic of Senegal in Japan, under the African Union (AU) presidency by Senegal.

On the occasion of Africa Day which marks the 59th anniversary of the establishment of the Organization of African Unity (OAU), State Minister SUZUKI expressed her congratulations and respect for the African countries’coordinated efforts under the AU’s initiative to achieve Agenda 2063. State Minister SUZUKI also stated that Japan will closely cooperate with African countries and related partners to further deepen relationships between Japan and Africa and set out a pathway for African development looking ahead to post-COVID19 era on the occasion of TICAD 8 held in August this year.