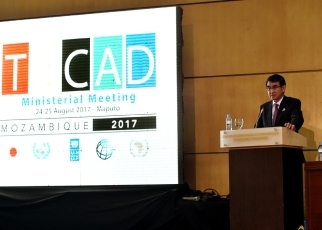 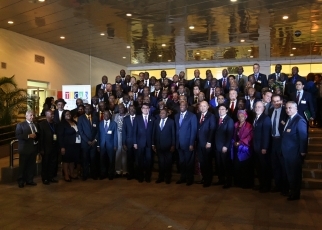 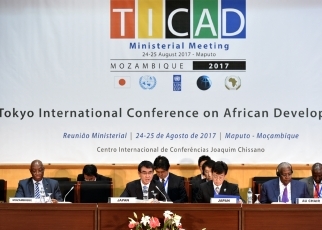 The Tokyo International Conference on African Development (TICAD) Ministerial Meeting was held in Maputo, the Republic of Mozambique, on August 24 and August 25. The overview is as follows. Mr. Taro Kono, Minister for Foreign Affairs, Mr. Manabu Horii, Parliamentary Vice-Minister for Foreign Affairs and Mr. Arata Takebe Parliamentary Vice-Minister of the Environment attended from Japan. Foreign Minister Kono served as co-chair along with representatives of the co-organizers (the United Nations, the United Nations Development Programme (UNDP), the World Bank, and the African Union Commission (AUC)). Minister of Foreign Affairs and Cooperation Oldemiro Júlio Marques Baloi attended from the host country Mozambique, and President Filipe Jacinto Nyusi was also present at the Opening Session and gave the welcome address.

2 Overview of the conference

3 Separate meetings and side events

2. Side event “Dialogue with Private Sector from Japan and Africa

Parliamentary Vice-Minister for Foreign Affairs Manabu Horii attended the side-event “Dialogue with Private Sector from Japan and Africa” held on August 24 and gave an address in which he stated that private sector companies play an extremely large role to play in encouraging the development and economic growth of Africa, and that TICAD provides an important platform for public-private coordination. He also told that he is confident that Japanese companies’ advanced technical capabilities will contribute to solving the developmental challenges of Africa. Ernesto Max Elias Tonela, Minister of Industry and Commerce of Mozambique and Dr. Rob Davies, Minister of Trade and Industry, Republic of South Africa attended the event with other African Ministers, 49 Japanese private companies and a total of more than 400 participants from 130 African private companies. Furthermore, a signing ceremony for 5 MoU between 5 Japanese companies and 3 African countries was held at the event.

3. Side event hosted by UNDP: Launching Ceremony of the Report about the Trend of Income Inequality in Sub Sahara Africa

Parliamentary Vice-Minister for Foreign Affairs Manabu Horii attended a launching ceremony of the Report about the Trend of Income Inequality in Sub Sahara Africa held on August 24 and told that, to continue the stable economic development in Africa, it is important that benefits of economic growth will spread to whole society and that for this purpose, investment to human resource, maintenance of domestic system, enhancement of productivity and reform of economic structure are critical. This side event was organized by UNDP and participated by African countries and UN agencies including the World Bank.

Parliamentary Vice-Minister of the Environment Arata Takebe attended the TICAD Ministerial Meeting side event “African Clean Cities Platform” held on August 24 and gave an address in which he stated that realization of clean cities will not only bring about healthy lives but also attract tourists and the investment that is necessary for the sustainable development of Africa. He also told that Japan intends to continue collaborating closely with African countries by utilizing this platform together to implement concrete initiatives, such as human resources development and the promotion of the 3Rs (Reduce, Reuse and Recycle) for better waste management, etc. and continue collaborating closely with the African countries.