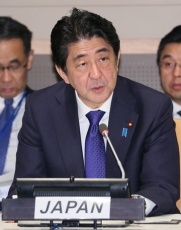 Photo: Cabinet Public Relations Office
1 On September 26, from 5:15 p.m. (local time) for approximately one hour, Mr. Shinzo Abe, Prime Minister of Japan, hosted the Third Japan-African Regional Economic Communities (RECs) Summit Roundtable at the United Nations Headquarters in New York. This meeting was participated by H.E. Mr. Uhuru Kenyatta, President of the Republic of Kenya (host country of the Sixth Tokyo International Conference on African Development (TICAD VI)), H.E. Mr. Hailemariam Desalegn, Prime Minister of the Federal Democratic Republic of Ethiopia (chair country of the Common Market for Eastern and Southern Africa (COMESA) and chair country of the Intergovernmental Authority on Development(IGAD)), and representatives from other RECs chair countries. In light of the fact that TICAD VI will be held next year in Kenya, for the first time in Africa, the participants exchanged opinions on the expected outcome of TICAD VI, how TICAD and RECs should cooperate each other, and how TICAD should respond to regional issues.

2 At the beginning, Prime Minister Abe stated that the decision was made that the next TICAD meeting would be held in Africa next year as he had promised in the Second RECs Summit Roundtable last year. Then, stating that this Third Japan-RECs meeting would be a kickoff meeting for Japan and Africa toward the next TICAD, Prime Minister Abe expressed his gratitude to Kenya for hosting TICAD. Moreover, Prime Minister Abe stated that at the TICAD VI, Japan will present Japan's contribution for dealing with threats to economic bases or to peace and stability, such as the Ebola virus disease, the expansion of violent extremism, frequent occurrence of terrorist attacks, and the fall in international resource prices after TICAD V. He added that since the next TICAD will be held in Africa, he will widely introduce to the people of Africa the preeminence of Japanese technology and products and how they can contribute to the stability and development of Africa. He also mentioned that Japan will take an ''all-Japan'' approach for the region-wide development of a broad area through ''quality infrastructure investment,'' emphasizing and enhancing human resource development, respecting Africa's ownership, supporting development Agenda 2063 that Africa has been advancing, and supporting ''Made in Africa'' to become an international brand.

3 President Kenyatta of Kenya, who spoke next, stated that he would make every possible effort for the success of TICAD VI, and expressed his strong intentions for the first international conference on Africa following the post-2015 development agenda and COP 21.

4 Subsequently, representatives from RECs member nations including Prime Minister Hailemariam of Ethiopia evaluated support from Japan through the past TICAD process, particularly the steady implementation of the commitment at TICAD V , and expressed their gratitude for this. At the same time, they stated that TICAD VI will be a great opportunity to promote the Agenda 2063, which has been advanced by Africa. Moreover, it was proposed that for the promotion of regional integration, the strengthening of efforts in fields such as agriculture, infrastructure development, promotion of trade, and industrialization are important, and high expectations toward TICAD VI for the realization of the above were expressed. Finally, Dr. Akihiko Tanaka, President of the Japan International Cooperation Agency (JICA), mentioning Japan's assistance for Africa in human resource development, agriculture, infrastructure development, and industrial human resource development, stated that TICAD VI will accelerate the business partnership between Japan and Africa.

5 The participants shared the view that they will enhance cooperation at the regional (RECs) level, beyond the national level, toward the TICAD VI to be held next year.