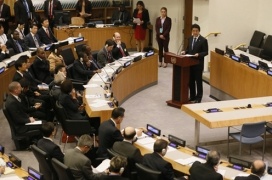 Excellencies, Ladies and Gentlemen,
First of all, I would like to convey my heartfelt condolences to those whose precious lives have been claimed by the Ebola virus disease.
I have just listened to remarks by the African leaders. I appreciate the significant contribution made by them. I recall my recent visit to Cote d'Ivoire earlier this year. On that occasion I discussed, together with H.E. President Ouattara, H.E. President Sirleaf of Liberia and H.E. President Koroma of Sierra Leone, further development of the region.
And this is only half a year ago.
Now I am shocked by the current Ebola outbreak that has mercilessly hit Liberia, Sierra Leone and Guinea and is consequently threatening their economies and stability.
My heart breaks to hear that many of the victims are women who were taking care of infected patients.
I would like to express my sincere admiration and respect for all those who are confronting the Ebola outbreak on the ground with determination. We must reward their courage.
We must stop this outbreak any way we can. Japan is determined to put forth its best in the fight against the Ebola virus disease.
Based on the concept of "human security," Japan has been taking the initiative on  assistance on health issues in Africa. Last year at TICAD V (the Fifth Tokyo International Conference on African Development) Japan announced it would set aside $500 million for these issues, and we have been steadily implementing this commitment. We have also launched training programs for some 120,000 health and medical service providers.
Since the beginning of the Ebola outbreak, we have quickly responded with a series of assistance. Japanese medical experts have been sent to the region on four separate occasions. We also announced that we are ready to share a promising potential drug developed by a Japanese company, which could be effective in the post-exposure phase of Ebola.
I hereby give full support to the initiative of H.E. Mr. Ban Ki-moon, U.N. Secretary-General, for establishing the United Nations Mission for Ebola Emergency Response(UNMEER). I also pledge to extend additional assistance totaling $40 million in order to reinforce the measures already announced. In addition, we are considering providing additional personal protective equipment as well as vehicles and sending additional medical staff.
Just as indicated in the U.N. Security Council Resolution, this crisis is an imminent challenge relating to international peace and security.
There is no prosperity of the world without the prosperity of Africa.
Japan is more than ever determined to move forward side by side with Africa.