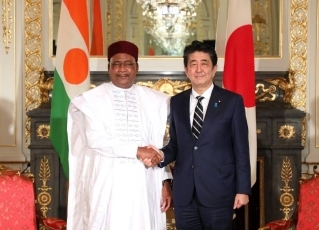 On October 21, commencing at 6:45 p.m. for approximately 15 minutes, Mr. ABE Shinzo, Prime Minister of Japan, held a Summit Meeting with H.E. Mr. ISSOUFOU Mahamadou, President of the Republic of Niger, who was visiting Japan. The overview of the meeting is as follows. The meeting was attended on the Japanese side by Mr. OKADA Naoki, Deputy Chief Cabinet Secretary, and others, and on the Niger side by Mr. Ouhoumoudou Mahamadou, Cabinet Minister and others.

Prime Minister Abe stated, “Your revisit to Japan immediately after the Seventh Tokyo International Conference on African Development (TICAD7) shows the favorable relations between Japan and Niger. I hope that we can further deepen our cooperation on issues in the international arena can be deepened between Japan and Niger, which will serve as a non-permanent member of the United Nations Security Council from January next year.”
In response, President Issoufou expressed his deep condolences to victims by Typhoon Hagibis, and congratulated on the Emperor’s accession to the Throne. In addition, President Issoufou commended a wonderful outcomes of TICAD7.

Prime Minister Abe stated, “I announced New Approach for Peace and Stability in Africa (NAPSA). Japan will continue to back up Africa-led initiatives such as G5 Sahel”. In response, President Issoufou mentioned that institution-building and human resources development are important to realize peace and stability in Africa and welcomed Japan’s efforts through NAPSA. Regarding bilateral relations, Prime Minister Abe said, “I am pleased to know that exchanges of notes were signed for a grant aid worth 1.3 billion yen to improve the equipment necessary for irrigation farming, and for food assistance worth 300 million yen.”
In response, President Issoufou expressed appreciation for Japan’s assistance in various sectors, including agriculture, and hoped that cooperation between Niger and Japan would develop in broader fields including education and job-creation.

The two leaders shared the view that the two countries will cooperate on various issues in the international arena, including the United Nations Security Council Reform. In addition, Prime Minister Abe sought understanding and cooperation on the early resolution of the abductions issue.

Page Top
Back to Japan-Niger Relations