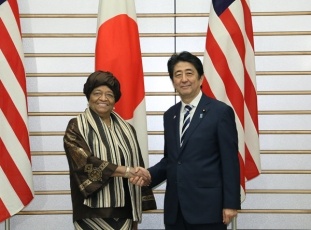 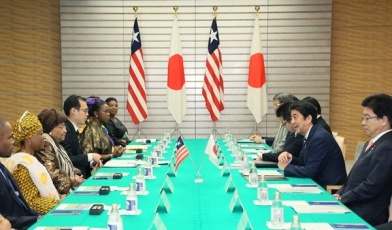 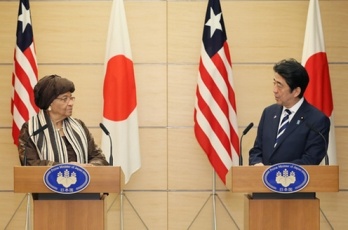 Photo: Cabinet Public Relations Office
On August 27, commencing at 6:45 p.m. for approximately 30 minutes, Mr. Shinzo Abe, Prime Minister, held a summit meeting at the Prime Minister's Office with H.E. Mrs. Ellen Johnson Sirleaf, President of the Republic of Liberia, who is visiting Japan to attend the World Assembly for Women (WAW! 2015). The overview of the meeting is as follows. A joint statement (PDF)

was issued at this meeting.
Afterwards, a dinner hosted by Prime Minister Abe was held in a cordial atmosphere from beginning to end, and the conversation covered a broad range of topics, including the empowerment of women.

Prime Minister Abe welcomed President Sirleaf's fifth visit to Japan as the President of Liberia while expressing his gratitude for her attendance at WAW! 2015 and his hope that her keynote address on the following day would make a major contribution to Japan's efforts for ''creating a society in which all women can shine.'' President Sirleaf replied that she felt honored to be able to participate in WAW! 2015.

2 Health issues, including responses to the Ebola outbreak, and the subsequent recovery

President Sirleaf expressed her gratitude for Japan's assistance in responding to the Ebola outbreak, and explained that Liberia was making efforts to rebuild its economy. Prime Minister Abe praised President Sirleaf's leadership in the fight against the Ebola, and the two leaders shared the view that they would strengthen cooperation in the health field.
Prime Minister Abe emphasized the importance of private sector-led growth in Liberia's recovery. President Sirleaf expressed the view that the recovery following the Ebola outbreak would move ahead based on the four pillars, namely infrastructure, health, education and agriculture. She requested support from Japan, and expressed her expectation that Japanese companies would resume their operations in Liberia.

Prime Minister Abe expressed the view that Japan would contribute more actively to the peace and stability of Africa and the international community based on the concept of Proactive Contribution to Peace. President Sirleaf stated that the cost of dealing with disputes before they arise was smaller than the cost of dealing with disputes after they arise, and expressed her support for Japan's proactive initiatives.

Both leaders agreed that they would strengthen cooperation between Liberia and Japan for the success of the next Tokyo International Conference on African Development (TICAD), which would be held in Kenya, Africa, for the first time next year.

5 Promoting cooperation in the international arena

Both leaders shared the view that they would enhance cooperation on a wide range of issues in the international arena, including the reform of the United Nations Security Council, the sustainable use of marine resources including whales, and the establishment of ''World Tsunami Day.''

Page Top
Back to Japan-Liberia Relations