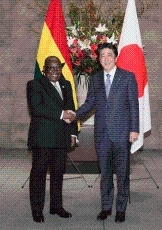 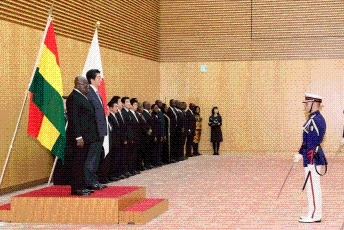 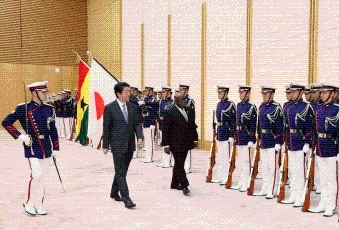 On December 11, commencing at around 6:30 p.m. for approximately 40 minutes, Mr. Shinzo Abe, Prime Minister of Japan, held a summit meeting with His Excellency Nana Addo Dankwa AKUFO-ADDO President of the Republic of Ghana, who was paying a visit to Japan. The overview of the summit meeting is as follows.

Following the summit meeting, exchange of notes on the grant aid project for the Project for 2nd Rehabilitation of National Trunk Road N8 took place in the presence of the two leaders and the two leaders issued a Joint Statement between Japan and Ghana (English (PDF)

). Subsequently the two leaders held a joint press occasion. Prime Minister Abe then hosted a dinner, where the two leaders discussed a broad range of topics relating to the bilateral relations.

(1) Prime Minister Abe welcomed President Akufo-Addo on his first visit to Japan as President of Ghana and stated that Ghana, which is a model country of democracy in Africa and shares basic values with Japan, is an impornatnt business-hub for Japanese companies. Prime Minister Abe also stated that the 40th anniversary of the establishment of the Noguchi Memorial Institute for Medical Research (NMIMR) next year is delightful and he would like President Akufo-Addo to attend the seventh Tokyo International Conference on African Development (TICAD7).

Prime Minister Abe also stated that Ghana figured prominently in the project on the Corridor Development for West Africa Growth Ring and Japan will contribute to reinforcement of regional connectivity through developing quality infrastructure by making use of Japanese high technology. In addition, Prime Minister Abe mentioned that he would like to continue to cooperate in the field of health with Ghana as one of the model countries in promoting Universal Health Coverage (UHC).
In response, President Akufo-Addo stated that Ghana was greatly inspired by Japan’s model of development and that Ghana was implementing the economic structural reform, adding that Ghana’s economy has recorded high rate of growth in recent years with the IMF program in Ghana ending at the end of this year. Furthermore, President Akufo-Addo expressed his expectations for Japan’s assistance in such areas as education, industry, agriculture, and new technology as well as for Japanese companies’ entry in Ghana’s market.
The two leaders shared the views on the necessity of improving business environment to further promote Japanese companies’ investment to Ghana, and Prime Minister Abe expressed his expectation for President Akufo-Addo’s strong initiatives.
In addition, Prime Minister Abe welcomed the signing of the Agreement establishing the African Continental Free Trade Area (AfCFTA) and asked President Akufo-Addo about the current status of ratification. In response, President Akufo-Addo expressed his anticipation for the entry into force of the Agreement within next year, explaining about the current situations of regional trade and signing/ratification process within AU.

3. Regional affairs and cooperation in the international arena

The two leaders reaffirmed their commitment to maintaining a free and open maritime order based on international law and expressed opposition to any unilateral actions that could change the status quo. The two leaders also shared the view that the full implementation of the United Nations Security Council resolutions is necessary for denuclearization of the Korean Peninsula. Prime Minister Abe also requested understanding and cooperation for resolving the abductions issue and President Akufo-Addo expressed support for it. Furthermore, the two leaders reaffirmed their shared position and the cooperation for the immediate launch of text-based negotiations in UNSC reform.
In addition, Prime Minister Abe expressed his gratitude to Ghana’s support for Japan's bid to host World Expo 2025 in Osaka and stated that he would like Ghana to attend the Expo in Osaka. In response, President Akufo-Addo expressed his intention to participate in TICAD7 next year, 2020 Tokyo Olympic and Paralympic Games and the World Expo 2025 in Osaka.