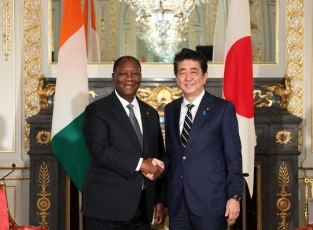 On October 21, commencing at 11:40 a.m. for approximately 10 minutes, Mr. ABE Shinzo , Prime Minister of Japan, held a summit meeting with H.E. Mr. Alassane OUATTARA, President of the Republic of Côte d’Ivoire, who was visiting Japan. The overview of the meeting is as follows. The meeting was attended on the Japanese side by Mr. NISHIMURA Akihiro, Deputy Chief Cabinet Secretaryand others, and on the Côte d'Ivoire side by Mr. Fidèle Sarassoro, Director of Cabinet and others.

In regard to bilateral relations, Prime Minister Abe stated, “I admire your efforts toward the economic revitalization as well as peace and stability of Côte d'Ivoire. I have high hopes for your leadership as President.” Prime Minister Abe also stated, “I am aware that, in addition to the Japan Desk, the Committee on the Improvement of the Business Environment for Japanese Companies’ Activities has been newly established. I believe this will support business activities of Japanese companies that will benefit local areas going forward.” In addition, Prime Minister Abe touched upon an Exchange of Note signed in September 2019 for a grant aid worth approximately 4.16 billion yen for the improvement of the University Hospital Center of Cocody. Japan will cooperate for high-quality infrastructure improvement under the ‘West Africa Growth Ring Master Plan.”
In response, President Ouattara expressed his willingness to work together in the field of promotion of private investment and trade as well as hid appreciation for Japan’s development aid including the improvement of the University Hospital Center of Cocody.

President Ouattara stated that Côte d'Ivoire would like to cooperate with Japan toward the peace and stability in Libya and the Sahel, and collaborate with Japan in international arena, including the United Nations.
In response, Prime Minister Abe stated that Japan would like to contribute to nation building through measures such as assistance for institution building under New Approach for Peace and Stability in Africa (NAPSA).
Furthermore, Prime Minister Abe sought understanding and cooperation on the early resolution of the abductions issue.
In conclusion, both leaders agreed to enhance bilateral relations.