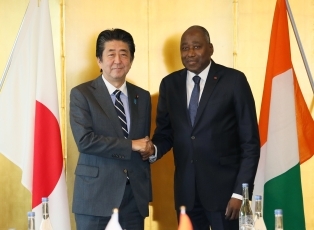 On August 31, for about 20 minutes, from 10:30 am, Prime Minister Shinzo Abe held a Japan-Cote d’Ivoire summit meeting with H.E. Mr. Amadou Gon Coulibaly, Prime Minister and Minister of Budget and State Portfolio of the Republic of Cote d’Ivoire. The overview of the meeting is as follows. Prime Minister Coulibaly participated in the Seventh Tokyo International Conference on African Development (TICAD7) which was held from August 28 to 30.