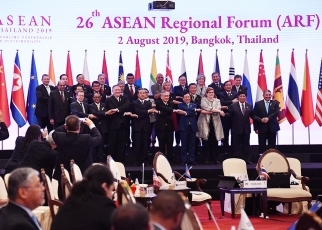 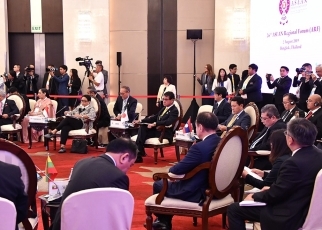 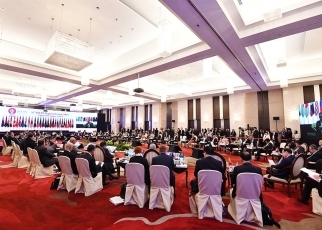 On August 2, from around 14:00 p.m.(local time) for approximately three hours and half, The 26th ASEAN Regional Forum (ARF) Ministerial Meeting was held in Bangkok, the Kingdom of Thailand. Foreign Minister Kono Taro attended the meeting. The overview of the meeting, with a focus on statements by Minister Kono’s comments, is as follows.

Minister Kono noted with appreciation the fact that ARF has been implementing a number of practical activities in the field of security, including non-traditional security issues, since its establishment and has become a main multilateral forum to enhance political and security dialogue and cooperation. He stated that Japan will continue to contribute to making the ARF process more meaningful and effective.
Many participants described the ARF as an appropriate forum for enhancing confidence building among the participants through, candid exchanges of viewa on non-traditional threats such as cyber, terrorism and climate change.

2. Exchange of views on regional and international issues

Minister Kono stated that Japan welcomes “ASEAN Outlook on the Indo-Pacific” and that ASEAN centrality and unity is one of the important basic principles in Japan’s vision for upholding a free and open Indo-Pacific. He also announced that Japan will promote cooperation through partnership with ASEAN and other countries in an inclusive manner.
Some participants explained their views and concepts on the Indo-Pacific. Reaffirming commonality among them, they expressed their intention to continue discussing the way to seek synergy among them.

Minister Kono stressed that the parties concerned need to resolve their conflict peacefully and to pursue demilitarization of disputed features. In this regard, he stated that Japan hopes that the conclusion of COC would lead to a peaceful and open South China Sea. He underlined that ARF also needs to deliver a strong message expressing serious concern over the worsening situation reflecting the basic principles that ASEAN has upheld.
Almost all of the participants took up the South China Sea issue and referred to the importance of securing the freedom of navigation and overflight as well as peaceful resolution of conflicts in accordance with the international law including the United Nations Convention on the Law of the Sea (UNCLOS). Many participants stressed the importance of non-militarization as well as self-restraint. Moreover, many participants referred to the necessity of an effective substantive Code of Conduct (COC).

Minister Kono explained about his visit to a camp in Cox’s Bazaar before coming to Bangkok and stated that the condition of the camps is still severe with the prolonged displacement. He also stressed that constructive dialogue between Myanmar and Bangladesh is indispensable in order to realize early repatriation. He announced that Japan will continue to support displaced people and host communities in Bangladesh and will encourage Myanmar to create an environment conducive to the return of displaced people. He expressed Japan’s appreciation for an enhance role of ASEAN in supporting Myanmar’s effort.
Many participants expressed concerns about the situation in Rakhine State and emphasized the importance of the support by the whole region.

In response to a remark that an ARF member made regarding Japan’s review of its trade control, Minister Kono explained Japan’s position on this matter.