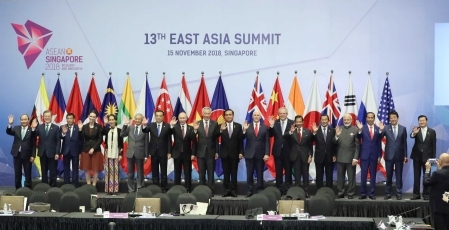 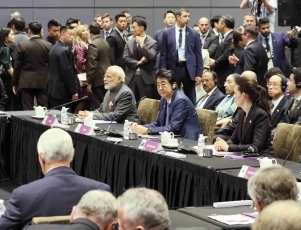 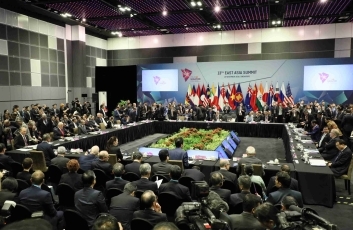 On Thursday, November 15, from 1:10 p.m. to 4:30 p.m. (local time), the East Asia Summit (EAS) retreat luncheon and plenary session was held in Singapore. Mr. Shinzo Abe, Prime Minister, attended from Japan. The overview of the meeting is as follows.

In a closed session, a discussion was held between the leaders regarding the future direction of EAS cooperation.

A. Prime Minister Abe stated that, during his official visit to China in October this year, Japan and China shared the view to play a constructive role for the peace and prosperity of the international community. He expressed his desire for the EAS discussions to proceed in the same spirit and stated the following.

(a) Free and open Indo-Pacific

(i) A free and open maritime order based on the rule of law is the cornerstone of the peace and prosperity in the Indo-Pacific region. We would like to realize a free and open Indo-Pacific for the development of this region. Included in this are the basic principles of ASEAN’s centrality and openness shared by EAS participating countries. Going forward, each country should work proactively to realize this.

(ii) Japan has taken concrete steps towards cooperation. In addition to implementing the joint hydrological surveys in the Straits of Singapore and Malacca, we have worked to build capacity and strengthen enforcement of maritime law. We are also advancing high quality infrastructure projects centered on the East-West Economic Corridor (EWEC) and the Southern Economic Corridor (SEC) that connect the Mekong region. We would like to emphasize the necessity of international standards of openness, transparency, economic efficiency, and fiscal soundness of recipient countries.

(iii) Initiatives that contribute to realizing a free and open Indo-Pacific do not exclude any countries. They benefit all countries in the region, large and small, and we will cooperate with all those who share these views.

(i) The spectacular economic growth of East Asia has resulted from trade and investment based on free and fair rules. Amidst growing protectionism, TPP-11 entering into force by the end of the year is an important achievement. We must promote free trade through World Trade Organization (WTO) reform, the expansion of TPP, and the swift conclusion of the Regional Comprehensive Economic Partnership (RCEP).

(ii) We will promote the utilisation of LNG, hydrogen, and so on. (iii) We look forward to the active role of the Economic Research Institute for ASEAN and East Asia (ERIA), which marked its 10th anniversary, to address issues such as ASEAN’s integration and reducing inequality.

B. In response, many participating countries expressed their respective views and concepts regarding the Indo-Pacific, confirmed common perspectives, and affirmed the importance of continuing discussions in order to further collaborate with and complement one another.

(2) Exchange of views on regional and international issues

(i) Japan welcomes the historic U.S.-North Korea Summit Meeting and three Inter-Korean Summits as a step toward the comprehensive resolution of the outstanding issues of concern such as abductions, nuclear, and missile issues. It is important for the international community to continue to support the U.S.-North Korea process.

(ii) It is necessary to fully implement the United Nations Security Council (UNSC) resolutions in order to achieve complete, verifiable, and irreversible dismantlement (CVID) of all weapons of mass destruction and ballistic missiles of all ranges by North Korea as stipulated in the UNSC resolutions.

(iii) Japan highly appreciates the cooperation of countries including the United States, Australia, the United Kingdom, Canada, and New Zealand for dispatching aircrafts and vessels to counter ship-to-ship transfers prohibited by UNSC resolutions. Japan wishes to continue to cooperate with each country.

(iv) Japan hopes to have understanding and cooperation towards the early resolution of the abductions issue.

(b) In response, many countries emphasized the importance of the denuclearization of the Korean Peninsula and of the full implementation of the UNSC resolutions.

(i). Disputes in the South China Sea should be resolved peacefully based on international law and not by force. From this perspective, we fully expect the formulation of an effective South China Sea Code of Conduct (COC) that can contribute to realizing a peaceful, open South China Sea.

(ii). At the same time, we have serious concerns about the developments in the South China Sea. Actions that seek to unilaterally change the status quo through militarization of disputed features threaten the interests of countries that utilize common resources in the South China Sea that support peace and stability of the entire region.

(iii). In order to realize a peaceful and open South China Sea, Japan supports the fundamental principles of “full respect for legal and diplomatic processes," “freedom of navigation,” and “the importance of non-militarization and self-restraint” that ASEAN has stipulated. Its importance should be conveyed strongly to the international community.

(b) In response, many countries referenced freedoms of navigation and overflight as well as the importance of the peaceful resolution of disputes in accordance with international law, including the UN Convention on the Law of the Sea. In addition, numerous countries raised the importance of non-militarization and self-restraint. Among such countries, some expressed serious concerns over the situation on the ground. Furthermore, many countries stated the necessity of an effective COC.

C. The situation in the Rakhine State

i. We commend the dialogue between Myanmar and Bangladesh on the return of displaced persons. It is our sincere hope that, in cooperation with the United Nations, their "safe, voluntary and dignified" return will be realized. The international community should continue to support the efforts of Myanmar and Bangladesh.

(b) In response, several leaders expressed concern about the human rights situation in Rakhine State and emphasized the need for safe return of the displaced persons.