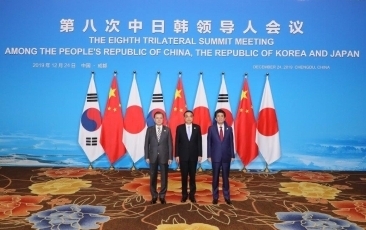 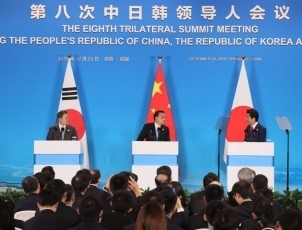 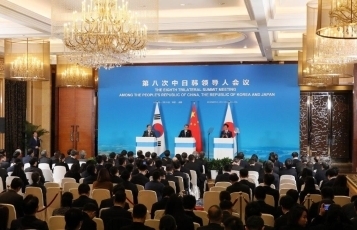 Japan-China-ROK joint press announcement2 Photo: Cabinet Public Relations Office
On Tuesday, December 24, from 10:00 to 11:15 a.m. (local time), the Eighth Japan-China-ROK Trilateral Summit meeting was held in Chengdu. The overview of the meeting is as follows. (The participating leaders were H.E. Mr. ABE Shinzo, Prime Minister of Japan; H.E. Mr. Li Keqiang, Premier of the State Council of the People’s Republic of China; and H.E. Mr. Moon Jae-in, President of the Republic of Korea [ROK].) Following the meeting, the outcome document “Trilateral Cooperation Vision for the Next Decade (PDF) 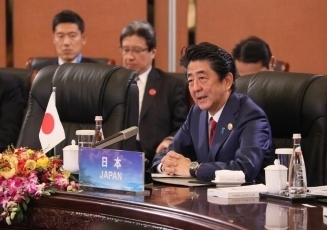 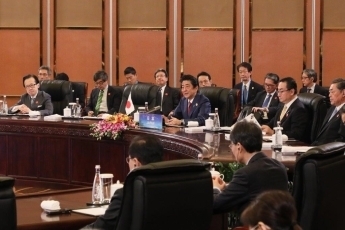 Prime Minister making a statement at the Japan-China-ROK Trilateral Summit Meeting2 Photo: Cabinet Public Relations Office
This Summit was held on the 20th anniversary of the commencement of Japan-China-ROK cooperation. The three leaders reviewed the trilateral cooperation over the past two decades and discussed the direction of the trilateral cooperation for the next decade. The leaders exchanged their views regarding regional and international affairs, including the issue of North Korea.

2 Assessment of Current Trilateral Cooperation and Its Future Direction

Prime Minister Abe stated as follows.
The three leaders confirmed that the three countries continue to share the position of steadfastly implementing the relevant UNSC resolutions and continuing to maintain the momentum of the process between the U.S. and North Korea. In addition, Prime Minister Abe sought the two leaders’ support and cooperation for the early resolution of the abductions issue and obtained their understanding on Japan’s position.

A. Free trade and investment

The G20 leaders, including Japan, China, and the ROK, confirmed the importance of elements such as openness, transparency, economic efficiency, and debt sustainability in the G20 Principles for Quality Infrastructure Investment. For the sustainable development of the region and the world, it is essential that we, the leading three countries of Asia, steadily promote and implement quality infrastructure investment in line with the G20 Principles.
The three leaders shared the opinion that Japan, China, and the ROK make up a significant share of the world economy’s GDP and trade and investment, and as such, they have and will continue to fulfill a critical role, and that free and fair trade and investment are crucial for the further development of the world economy. Furthermore, the three leaders confirmed that they will continue to make efforts to achieve a modern, comprehensive, high-quality, and mutually beneficial RCEP agreement. The three leaders also shared the view on pursuing a Japan-China-ROK FTA with sufficient added value to RCEP.

Prime Minister Abe stated as follows.
Japan seeks to realize a free and open Indo-Pacific based on the rule of law. From this perspective, Japan will pursue synergies between Japan’s initiatives and the “ASEAN Outlook on the Indo-Pacific (AOIP)” adopted by ASEAN, while respecting ASEAN centrality and unity. I look forward to the efforts by China and the ROK to coordinate with the AOIP, while respecting ASEAN centrality and unity.

Prime Minister Abe stated as follows.
At the G20 Osaka Summit and TICAD 7 hosted by Japan this year, I, as chair, spearheaded efforts to address global issues, including climate change, environment, energy, disaster risk reduction, education, and health. Japan intends to cooperate with China and the ROK on these issues.
The three leaders then shared the need to actively tackle climate change and environmental issues in particular.