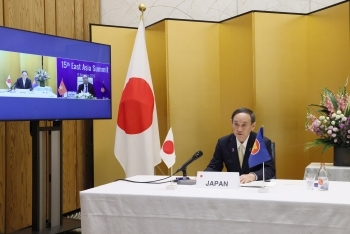 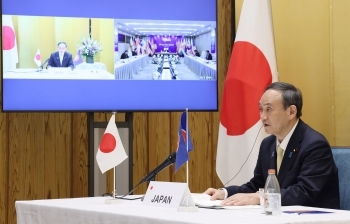 In the remarks by participating countries following a statement from Viet Nam as the Chair of ASEAN, Prime Minister Suga stated the following.

(1) I am honored to participate in EAS for the first time. EAS is the premier forum for leaders to directly discuss political and strategic issues. I welcome the 15th anniversary of the EAS.

(2) The ASEAN Outlook on the Indo-Pacific (AOIP), issued by ASEAN, sets forth the rule of law, openness, freedom, transparency and inclusivity as ASEAN's principles of action. The Outlook shares many fundamental commonalities with the "Free and Open Indo-Pacific (FOIP)" promoted by Japan. Japan fully supports the AOIP. I would like to call on each country for their support.

(3) At the Japan-ASEAN Summit on November 12, Japan and ASEAN confirmed they would proceed with concrete projects, in line with the AOIP and FOIP. Japan, as an Indo-Pacific nation, will continue to lead efforts for peace and prosperity in the region.

i. East and South China Seas

(a) In the region, developments contrary to the rule of law and openness have been unfolding. In the East China Sea, activities that violate Japan's sovereignty continue, and in the South China Sea, there have been actions that increase tensions such as ballistic missile launches and further militarization of the features, and claims that are inconsistent with the United Nations Convention on the Law of the Sea (UNCLOS).

Japan has grave concerns over the series of developments such as the enactment of the national security law. It is important that Hong Kong upholds a free and open system under the "One Country Two System" framework, and the freedoms and rights of the people in Hong Kong as well as people and businesses from all countries are respected, and that Hong Kong will continue to develop in a democratic and stable manner.

The full implementation of United Nations Security Council resolutions, including addressing "ship-to-ship transfers", is essential to achieve the complete, verifiable, and irreversible dismantlement (CVID) of all weapons of mass destruction and ballistic missiles of all ranges of North Korea. In addition, Japan asks for continued understanding and cooperation toward the early resolution of the abductions issue.

Japan will strongly support the ASEAN Centre for Public Health Emergencies and Emerging Diseases, the establishment of which was announced on November 12. Japan will promote the provision of medical supplies and equipment and technical cooperation to ASEAN countries.

(2) An overview of statements from participating countries regarding regional and international affairs is as follows.

i. Many countries spoke about equitable access to a safe, affordable vaccine as a measure against the COVID-19 and welcomed contributions from EAS participant countries, including Japan.

iii. Many countries stressed the importance of the complete denuclearization of the Korean Peninsula and the implementation of the United Nations Security Council resolutions.

In conclusion of his remarks, Prime Minister Suga expressed his determination to host the Tokyo Olympic and Paralympic Games in the summer of next year as proof that humanity has defeated the pandemic and that he will continue to spare no effort in order to hold the Games safe and secure.