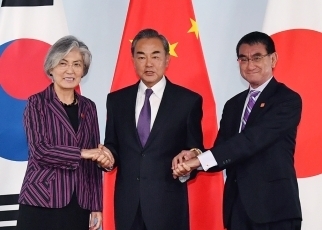 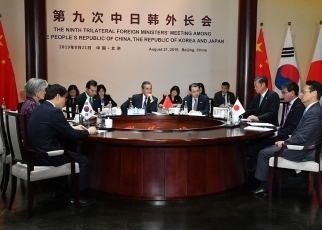 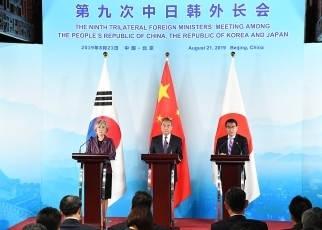 On Wednesday, August 21, from around 9:30 a.m. (local time) for approximately 1 hour and 45 minutes, the Ninth Trilateral Foreign Ministers’ Meeting between Japan, the People’s Republic of China, and the Republic of Korea (ROK) was held in Gubei Water Town in China. The overview of the meeting is as follows (attendees: Mr. Taro Kono, Minister for Foreign Affairs; H.E. Mr. Wang Yi, State Councilor and Foreign Minister of the People’s Republic of China [Chair]; H.E. Dr. Kang Kyung-wha, Minister of Foreign Affairs of the Republic of Korea; and others). The three Ministers reached a consensus on the Concept Paper on “Trilateral+X” Cooperation(PDF)

.
The meeting was followed by an informal working lunch at which the developments surrounding North Korea and other issues were discussed.

(1) The three Ministers confirmed that trilateral cooperation in various areas made steady progress, and discussed the current status and future direction of concrete cooperation programs.
Minister Kono underscored the importance of people-to-people exchanges, in particular, the ones motivated by the Olympic and Paralympic Games being hosted by the three countries in turn. Minister Kono also welcomed the progress made in academic exchanges, such as “Campus Asia.”
Regarding the environment, Minister Kono expressed his intention to advance cooperation on the field of actions on marine plastic litter on which significant achievements were made at the G20 Osaka Summit.
Minister Kono explained about the Seventh Tokyo International Conference on African Development (TICAD 7) to be held in Yokohama from August 28, and encouraged active participation of parties from China and the ROK. Minister Kono underscored that the G20 Principles for Quality Infrastructure Investment needs to be complied with and promoted also in Africa.
(2) The three Ministers shared the view of aiming to conclude the Regional Comprehensive Economic Partnership (RCEP) negotiations this year and accelerating the negotiations of Japan-China-ROK Free Trade Agreement (FTA), taking into consideration aspects such as the fundamental principles for free trade shared at the G20 Osaka Summit.
Minister Kono requested China and the ROK to lift their import restrictions on Japanese food products.
(3) Minister Kono stated that Mr. Hisashi Michigami, Consul-General of Japan in Busan, will be appointed as the Secretary-General of the Trilateral Cooperation Secretariat (TCS) in September 2019, and expressed his intention to promote further cooperation between the three countries and TCS.

Regarding the developments surrounding North Korea, the three Ministers exchanged views in light of the recent situation, and shared the intention that they will closely coordinate together, including on the full implementation of the United Nations Security Council resolutions, towards the complete denuclearization of the Korean Peninsula, which is a common goal of Japan, China, and the ROK. In addition, Minister Kono once again called for the cooperation of China and the ROK towards the early resolution of the abductions issue, and both countries expressed their understanding.

Minister Kono noted that, in order to realize a free and open Indo-Pacific, it was important for Japan, China, and the ROK to cooperate in a way that is attuned to the needs of ASEAN countries. Minister Kono also expressed intention for trilateral coordination in the lead-up to the East Asia Summit (EAS) in November.

The three Ministers shared the view that they will continue cooperation so that the outcome of the Trilateral Foreign Ministers’ Meeting will lead to the Eighth Trilateral Summit, which China is arranging to host as the chair country.