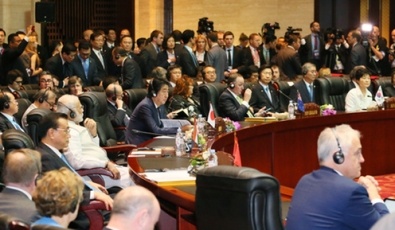 Photo: Cabinet Public Relations Office
The East Asia Summit (EAS) was held in Vientiane, Laos. Prime Minister Shinzo Abe attended the meeting. The overview is as below. The meeting was chaired by His Excellency Dr. Thongloun Sisoulith, Prime Minister of Laos.

1 Review and Future Direction of the EAS Cooperation

Japan will provide 45 billion yen and conduct human resources development for 2,000 personnel over the next three years to support the enhancement of counterterrorism capabilities, including border measures, for the sake of countering terrorism and violent extremism in EAS participating countries. Also in order to deal with violent extremism, which is the root cause of terrorism, we intend to contribute even more actively through a comprehensive approach, including encouragement of moderation through personnel exchanges, educational activities and other initiatives, and support for social and economic development that underpins a moderate society.

(ii) Strengthening of the EAS

I stress that the functions of the EAS should be further strengthened as the premier forum in the region. It is our desire to steadily implement the Kuala Lumpur Declaration on the Tenth Anniversary of the ES and to promote further vitalization of the discussions in the political and security areas in the EAS.

As Trans-Pacific Partnership (TPP) has a great significance, we intend to exert our utmost efforts for TPP's early entry into force. The Regional Comprehensive Economic Partnership negotiations are an important pillar of the economic integration of East Asia. We intend to negotiate actively for the early conclusion of a comprehensive, well-balanced, and high-level agreement.

(v) The Vital Artery of Growth and Prosperity

(2) Many leaders pointed out the importance of the EAS. At the same time, many leaders strongly condemned recent terrorist attacks, and stressed the importance of counter-terrorism measures and collaboration among the EAS participating countries. In addition, several leaders pointed out that maritime cooperation should be added to the EAS priority areas of cooperation.

2 Exchange of Views on Regional and International Issues

(i) Prime Minister Abe stated the following. (ii) Almost all leaders raised the South China Sea issue and called upon settlement of disputes in accordance with international law by referring to the Philippines-China arbitral award or UNCLOS. Not a single country claimed that the Philippines-China arbitral award is invalid. Furthermore, the fact that many countries called for exercising self-restraint on actions that could raise tensions, and that several countries urged non-militarization also deserves acclaim.

North Korea has launched approximately 20 ballistic missiles since the beginning of this year. Three ballistic missiles launched by North Korea on September 5, when the G20 Summit was being held, fell into Japan's exclusive economic zone. Such an act is unprecedented and unforgivable. North Korea's missile capability, including that of intermediate-range ballistic missiles and submarine-launched ballistic missiles, is a grave threat to the security of Japan and the region. Repeated provocations by North Korea are a clear challenge to the international community. There is no other way but to augment pressure on North Korea through strict implementation of the UN Security Council (UNSC) resolutions. The human rights and humanitarian issues of North Korea are serious. In particular, the abductions issue is the most important issue that concerns Japan's sovereignty and the lives and safety of Japanese people. We call for understanding and cooperation of the relevant countries for early resolution.

Many leaders including Prime Minister Abe pointed out the importance of the EAS Statement on Non-proliferation, leading to its adoption. It was very meaningful that all 18 EAS participating countries, including China, Russia and ASEAN member states, stood united to issue the statement right after the missile launch by North Korea amid the G20 Summit.

Japan, China and the Republic of Korea (ROK) share a major responsibility for peace and prosperity in the region. Japan will host the Japan-China-ROK Summit as this year's chair on the basis of the Japan-China-ROK Foreign Ministers' Meeting held in Tokyo last month. Japan hopes to strengthen cooperation among the three countries.