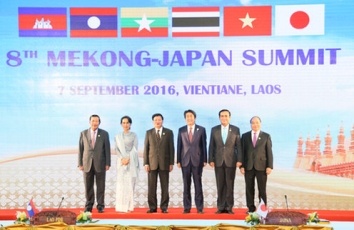 (1)Co-chair Prime Minister Thongloun expressed pleasure at having the opportunity to host the meeting together with Prime Minister Abe, expressed his appreciation to the Japanese Government and Japanese people for Japan-Mekong cooperation that has resulted in adoption of the "New Tokyo Strategy 2015 for Mekong-Japan Cooperation," the "Japan-Mekong Action Plan" (below, Action Plan), and other initiatives since the forum was launched in 2009, and that provided specific results in infrastructure development and human resource training, expressing its intention to focus on strengthening cooperation.

(2)Prime Minister Abe emphasized that bolstering the resilience of the ASEAN economy, which constitutes a massive market of 600 million people, is a vital issue amid growing downside risk for the global economy outlook, that growth by the Mekong region with rich potential is important, and that Japan intends to supply longer-term risk money for the development of quality infrastructure and hopes to contribute to lifting the Mekong region's GDP by 20 billion dollars by 2020, as proposed in the Mekong Industrial Development Vision, including through the Initiative for Quality Infrastructure Expansion that aims to provide about 200 billion dollars over five years.

(1)    Prime Minister Abe offered the following comments on Japan-Mekong cooperation.  (2)    Comments by Mekong countries in response to these points are summarized below.

Prime Minister Abe commented that regional peace and stability are essential for the further growth and advancement by the Mekong region, that Japan intends to continue contributing to regional peace and prosperity under its policy of "Proactive Contribution to Peace" based on the principle of international cooperation, including its "Legislation for Security and Peace," and that it welcomed peaceful implementation of Myanmar's general election in November 2015 and Thailand's national referendum on the draft of a new Constitution, in this regard. Participating countries expressed support for all types of measures that contribute to peace and stability based on mutual understanding and trust. Discussion on the regional issues, including various concerns about the South China Sea and North Korea also took place.