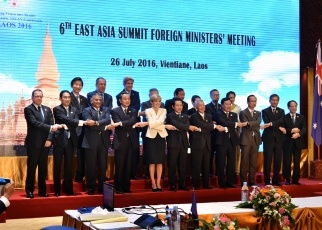 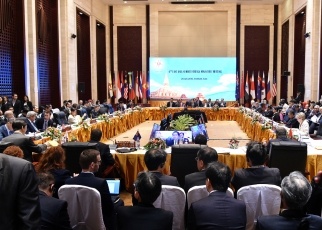 The Sixth East Asia Summit (EAS) Foreign Ministers’ Meeting was held in Vientiane, Lao PDR, on July 26 from 1125 to 1415 (local time). Fumio Kishida, Minister for Foreign Affairs of Japan attended the meeting. The overview is as follows.

1 Review of EAS cooperation and its future direction

(1) Countermeasures against terrorism and violent extremism

Minister Kishida began by offering his condolences to all of the victims of terrorist incidents in Nice, France and Dhaka, Bangladesh as well as other places around the world. In addition, Minister Kishida stressed that Japan condemned such terrorist attacks emphatically. Furthermore, Minister Kishida expressed his will to make further proactive contribution to support activities by EAS participating countries for counter-terrorism capacity building, including those for border controls, and to address root causes of terrorism, for the purpose of countering terrorism and violent extremism. Many participating countries also strongly condemned series of terrorist attacks, and emphasized the importance of counter terrorism measures.

Minister Kishida stated that realizing sustainable economic development was crucial for peace and prosperity in East Asia. In light of this, Minister Kishida indicated that the Trans-Pacific Partnership (TPP) Agreement had a substantial significance to become a basis for discussion of the Free Trade Area of the Asia-Pacific (FTAAP) rules and the global standard in the 21st century and that Japan would also like to make its utmost efforts toward early entry into force of the TPP. Furthermore, with regard to the Regional Comprehensive Economic Partnership (RCEP), Minister Kishida expressed his will that Japan would like to continue to promote negotiations vigorously to conclude a comprehensive, balanced and high-level agreement in cooperation with other Parties.
In addition, Minister Kishida emphasized that promoting connectivity was the key to sustainable economic development in East Asia, and that, based on the Principles  agreed upon at the G7 Ise-Shima Summit, measures such as Quality Infrastructure Investment and human resource development with careful consideration on needs of respective countries were important to promote connectivity. Minister Kishida also referred to the Japan-Mekong Connectivity Initiative he proposed in May, and reiterated that he would like to cooperate with countries concerned to enhance ''''vibrant and effective'''' connectivity. Also, Minister Kishida affirmed Japan's support for the Economic Research Institute for ASEAN and East Asia (ERIA) as an international organization that engages in policy research that contributes to the integration of East Asia, and his hope that each nation would make use of ERIA.

2 Exchange of views on regional and international issues

Minister Kishida stated that it was totally unacceptable that North Korea not only conducted its fourth nuclear test and a series of ballistic missile launches, but also launched a ballistic missile presumed to be Musudan, and has been pursuing the development of SLBMs since the EAS held in November last year. In addition, Minister Kishida called on EAS participating countries to take united actions in urging North Korea to refrain from any further provocation, comply with United Nations Security Council resolutions (UNSCR) and the Joint Statement of the Six-Party Talks, and take concrete actions toward denuclearization and other goals. Furthermore, Minister Kishida stated that it was necessary to put pressure on North Korea through ensuring strict implementation of UNSCRs, and that the EAS should issue a strong message regarding North Korea's human rights and humanitarian issues, including the abductions.
In response, many participating countries stated that the series of nuclear test and missile launches by North Korea were violation of UNSCRs and undermined regional stability and urged North Korea to comply with UNSCRs.

While expressing his appreciation to Lao PDR Chairmanship for fruitful discussions, Minister Kishida reiterated the importance of continued efforts to strengthen the EAS next year and into the future, and expressed Japan's resolution to continue making a contribution in the lead up to the EAS in September this year, while respecting the ASEAN centrality.