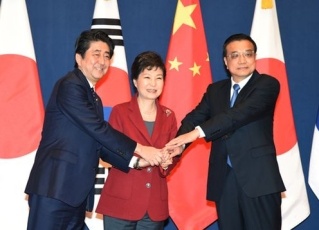 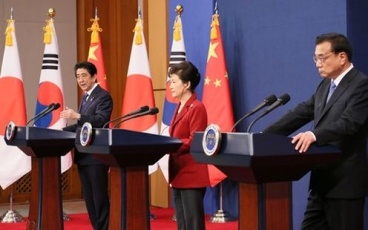 （2） More specifically the three Leaders decided to further strengthen cooperation in a number of areas including disaster risk reduction, environment, youth exchange, and economy.  Prime Minister Abe noted the positive outcomes of the Fourth Trilateral Ministerial Meeting on Disaster Management held in Tokyo prior to this summit, and expressed his intention to host the Trilateral Youth Summit in Japan next year.  He stated that he would like to make further efforts towards the acceleration of the trilateral FTA negotiations and the Regional Comprehensive Economic Partnership (RCEP) negotiations in order to achieve early conclusion of comprehensive and high-level agreements as an important pillar towards the economic integration of East Asia.

The three Leaders reaffirmed their firm opposition to the development of nuclear weapons on the Korean Peninsula and shared the view that international obligations and commitments under all relevant UN Security Council resolutions and the Joint Statement of the Six-Party Talks should be faithfully implemented. They expressed their opposition to any action that may cause tension on the Korean Peninsula.  They decided to continue their joint efforts to resume the Six-Party Talks in a meaningful manner. Prime Minister Abe called on both the People's Republic of China and ROK for their understanding and cooperation on the early resolution of the abductions issue.

The three Leaders affirmed the importance of trilateral cooperation in East Asia regional cooperation, and resolved to make efforts towards the economic integration of East Asia with the establishment of the ASEAN Community in 2015 in view. Regarding the East Asia Summit (EAS), marked by the 10th anniversary of its establishment this year, Prime Minister Abe stressed the importance of strengthening discussions on political and security issues and reinforcing the institution as the premier forum of the region.

The three Leaders vowed to work in concert to address challenges wrought by the global economy, to create conditions to sustain the recovery of global economy, and to foment increased economic growth. In addition, they look forward to meaningful progress at the G20 Summit and APEC Economic Leaders' Meeting among other conferences.  Prime Minister Abe introduced his newly-announced ''three arrows'' namely ''the strong economy'', ''cares and supports for raising children'', and ''social security leading to people's peace of mind'', and resolved to contribute to regional and global economic growth.

The three Leaders welcomed the official adoption of the 2030 Agenda for Sustainable Development at the UN Sustainable Development Summit, and decided to cooperate for the adoption of a legally binding, and ambitious agreement applicable to all parties at the 21st session of the Conference of the Parties to the UN Framework Convention on Climate Change (UNFCCC COP21).  Prime Minister Abe emphasized the importance of the agreement as a new legal and suitable framework applicable to all Parties, and the importance of support for initiatives for health care such as infectious disease prevention and promotion of Universal Health Coverage (UHC), and of the establishment of the World Tsunami Day

（5）Counterterrorism and Middle East and Africa

Regarding the counterterrorism and Middle East and Africa, Prime Minister Abe emphasized that ISIL is a serious threat to the international community more than ever and that multifaceted and longstanding measures in cooperation with relevant countries were important.  In addition, he welcomed the resumption of the Trilateral Consultation on Counterterrorism and Trilateral Policy Dialogue on African Affairs and the decision to hold a trilateral policy consultation meeting on Middle Eastern and North African affairs,

History issues were mentioned during this summit and Prime Minister Abe stated that he issued a statement on the 70th anniversary of the end of World War II in August this year, which stated that Japan will take the lessons of history and the position articulated by the previous cabinets will remain unshakable into the future and that based on the path Japan had taken as a peace-loving nation for the past 70 years, Japan was determined to contribute to the peace and prosperity of the world more than ever before. He also stated that we needed not only to squarely face the history but also to cooperate together toward the future, and that it was not productive to focus on a certain period of the past. He then concluded that Japan-ROK and Japan-China had a history of cooperation and shared development, and he hoped to continue to write a looking-forwarded history of this trilateral cooperation.

4 The Next Trilateral Summit

The three Leaders reached a consensus to hold the Seventh Trilateral Summit in Japan next year.  Prime Minister Abe expressed his intention to play a role of the chairman to enhance further positive cooperation, based on the discussions in the Sixth Trilateral Summit, and stated he looked forward to welcoming in Japan Ms. PARK Geun-hye, President of the Republic of Korea and Mr. LI Keqiang, Premier of the State Council of the People's Republic of China.