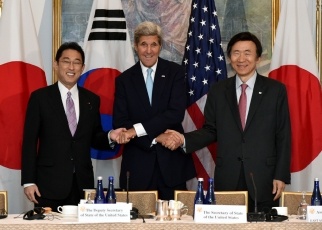 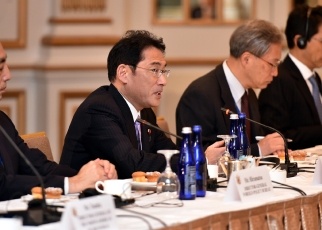 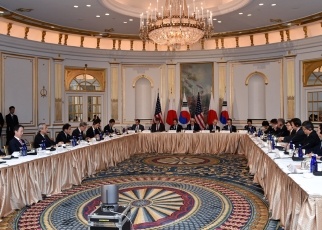 On September 29, commencing at 8:30 a.m. (local time) for approximately 45 minutes, Mr. Fumio Kishida, Minister for Foreign Affairs, who was visiting New York to attend the United Nations General Assembly, held a Japan-U.S.-ROK Trilateral Foreign Ministers’ Meeting with Mr. Yun Byung-se, Minister of Foreign Affairs of the Republic of Korea, and Mr. John F. Kerry, Secretary of State of the United States. The overview of the meeting is as follows (the previous Japan-U.S.-ROK Trilateral Foreign Ministers’ Meeting was held on August 10, 2014, in Nay Pyi Taw, Myanmar).

At the beginning, Minister Kishida stated that given the fact, that the security environment in Asia including the issue of North Korea remains severe, the Japan-U.S. alliance and the U.S.-ROK alliance have a major role to play in ensuring peace and stability in the region. As such, Minister Kishida mentioned that it was very meaningful that the foreign ministers of Japan, the U.S., and the ROK gathered for the first time in almost a year to exchange frank opinions on pressing regional and global issues, such as the issue of North Korea. Minister Kishida also expressed his intention to further deepen dialogues and cooperation among the three countries.
The three foreign ministers reconfirmed the importance of even closer cooperation among Japan, the U.S., and the ROK, in a wide range of areas including those related to North Korea and security.

The three foreign ministers shared the concern over nuclear and missile development and also shared recognition that the launching of a long-range ballistic missile (even if it is claimed to be a ''satellite'') and nuclear test by North Korea are both clear violation of the relevant United Nations Security Council resolutions and would lead to firm response from the international community. The three foreign ministers also confirmed that they would strongly urge North Korea to refrain from provocative actions and to comply with the UN Security Council resolutions and the Joint Statement of the Six-Party Talks.
Moreover, Minister Kishida explained the current status of Japan-North Korea relations and confirmed that Japan, the U.S., and the ROK would continue close cooperation for the resolution of humanitarian issues including the abductions issue.