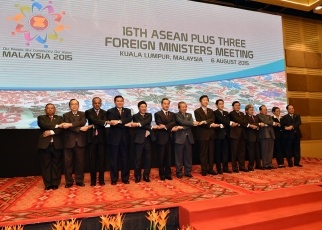 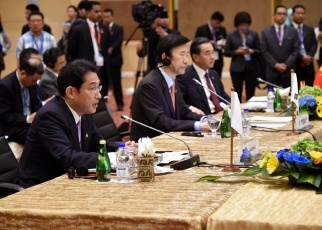 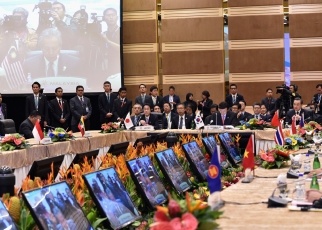 State Minister Kiuchi commented that responding effectively to the vast infrastructure demand in Asia is an important issue. He stated that Japan, together with other donor countries and international development finance institutions, will extend strong support for ASEAN community building this year and integration efforts next year and beyond, based on the provision of approximately 110 billion US dollars for quality infrastructure investment in Asia over the next five years through the recently announced ''Partnership for Quality Infrastructure,'' as well as Japan-Mekong cooperation on the scale of 750 billion yen over the next three years. In response, some countries expressed appreciation for Japan's initiatives.

State Minister Kiuchi stated that the National Diet of Japan completed procedures for the approval of the Agreement Establishing ASEAN+3 Macroeconomic Research Office (AMRO) on May 15, and that Japan deposited this Agreement on June 26. He stated that he is hoping for this Agreement to be entered into force at an early date. In response, many countries mentioned measures on financial cooperation, and stressed the importance of the Agreement's entering into force at an early date.

State Minister Kiuchi explained that through the framework of the ''ASEAN Plus Three Emergency Rice Reserve,'' Japan is providing rice to countries such as the Philippines and Cambodia and is promoting public-private partnership cooperation for the ''food value chains.'' Furthermore, State Minister Kiuchi called for the lifting of import restrictions on Japanese products. Some countries expressed appreciation for Japan's initiatives on the ''food value chains''.

Foreign Ministers commented on the future direction of cooperation regarding East Asia Vision Group II, proposed by experts from the private sector. State Minister Kiuchi stated that Japan is contributing to a follow-up of East Asia Vision Group II, and leading in the three areas of ''Higher education,'' ''Public health services,'' and ''Engagement of various stakeholders''. In addition he commented that Japan intends to continue cooperating with various countries and will submit a ''final report'' at this year's summit meeting.

2 Exchange of views on regional and international issues

State Minister Kiuchi commented that at the Japan-China-ROK Trilateral Foreign Ministers' Meeting, which was held in March this year for the first time in three years, three ministers decided to continue their efforts ''to hold the Trilateral Summit at the earliest convenient time,'' and thus China-Japan-ROK trilateral cooperation was on track to recovery. He added that Japan intends to continue working hard for the early holding of the summit in close cooperation with China and the ROK. The ROK stated that it intends to make efforts to convene the Summit by the end of this year.

State Minister Kiuchi stated that: (i) the advancement of nuclear and missile capabilities by North Korea poses a grave threat to the region and international community, (ii) it is important to strongly urge North Korea to refrain from provocations and take concrete steps towards denuclearization, (iii) it is important for all countries to strictly implement Security Council resolutions including on export controls, and (iv) he seeks for understanding and cooperation of the APT member states on the abduction issue, which is a critical issue concerning the sovereignty of Japan and lives and safety of its citizens as well as an universal issue for the international community overall as a violation of fundamental human rights. Many countries stated that North Korea should refrain from provocations, abide by Security Council resolutions, and return to the Six-Party Talks.

State Minister Kiuchi stated that it is important for each country to refrain from taking unilateral actions that will increase tensions, and to act based on the principle of ''the rule of law.'' He also stated that it is especially important at this point in time to uphold the ''the three principles of rule of law at sea,'' namely: (i) states shall make and clarify their claims based on international law, (ii)states shall not use force or coercion in trying to drive their claims, and (iii) states shall seek to settle disputes by peaceful means. He added that Japan is strongly hoping for the full implementation of the 2002 Declaration on the Conduct of Parties in the South China Sea (DOC) and an early conclusion on the Code of the Conduct in the South China Sea (COC).Many countries explained the importance of full implementation of the DOC, early conclusion of the COC, self-restrain and peaceful resolution.