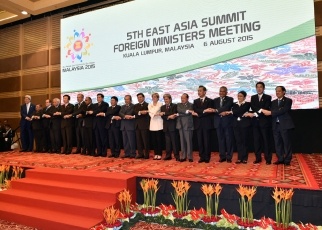 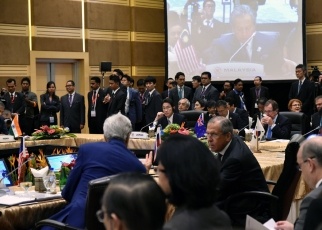 1 Review of the EAS cooperation and the way forward

Foreign Minister Kishida stressed that Japan puts its importance on the EAS, that the 10th anniversary of its establishment would provide an ideal opportunity for strengthening the EAS, and that EAS member countries should work together in order to strengthen the EAS as a premier forum of the region. In addition, he highly commended the leadership shown by Malaysia, and expressed support for adoption of a declaration commemorating for the 10-year anniversary at the EAS Meeting this year. In this regard, he reiterated that Japan puts its emphasis on (i) expanding on political and security issues and (ii) reinforcing the EAS institution, and, to this end, pointed out the importance of convening regular meetings attended by permanent representatives of the EAS member countries, establishing an EAS Unit at the ASEAN Secretariat, and enhancing linkage between the EAS and the ADMM+. In response, many member countries emphasized the importance of strengthening the EAS, made concrete proposals to that end, and supported the announcement of the declaration for the 10-year anniversary.

Foreign Minister Kishida stated that it is important to effectively deal with a vast infrastructure demand in Asia, and that Japan will strongly support the ASEAN Community building this year and integration efforts beyond this year, through provision of approximately 110 billion U.S. dollars for ''Quality Infrastructure Investment'' in Asia over the next five years based on the ''Partnership for Quality Infrastructure'', and approximately 750 million yen of Japan-Mekong cooperation over the next three years.

Foreign Minister Kishida explained that Japan has provided support for the ASEAN Coordinating Center for Humanitarian Assistance on Disaster Management (AHA Center) by measures such as introducing an ICT system, and stated that Japan will continue to provide assistance by focusing mainly on human resources development.

(1) Legislation for peace and security

Foreign Minister Kishida explained that Japan's ''Legislation for Peace and Security'' are aiming at further contributing to the peace and stability of the region as well as the international community.

Foreign Minister Kishida stated that Japan held the ''High Level Seminar on Peacebuilding, National Reconciliation and Democratization in Asia'' in Tokyo in June, and that participants in the seminar highly commended developments of many Asian countries in terms of peace, economic development, national reconciliation and democratization. In addition, he also reported that participants went through discussions and shared views on the importance of (i) comprehensive promotion of peacebuilding, national reconciliation, economic development and democratization, (ii) tolerance of diversity and (iii) empowerment of moderates. Furthermore, he expressed his appreciation to countries concerned for their contribution to the seminar.