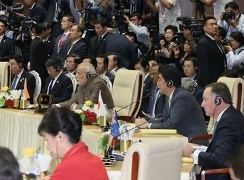 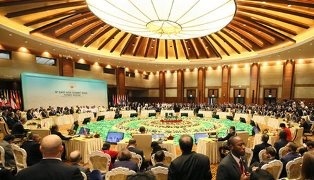 Photo: Cabinet Public Relations Office
The 9th East Asia Summit (EAS) Meeting was held in Nay Pyi Taw, Myanmar on Thursday, November 13, commencing at 9:25 a.m. to 12:15 p.m. An overview of the meeting is as follows. The meeting was chaired by H.E. Mr. U Thein Sein, President of the Republic of the Union of Myanmar. In this meeting, four independent statements were adopted: EAS Joint Statement on Regional Response to the Outbreak of Ebola Virus Disease, EAS Statement on the Rise of Violence and Brutality Committed by Terrorist/Extremist Organisations in Iraq and Syria, Statement on EAS Guidelines for Rapid Disaster Response and EAS Declaration on Combating Wildlife Trafficking.

(1) Efforts on Imminent Challenges
Prime Minister Abe stated that the EAS should tackle the challenges that the world is facing today, such as ISIL and Ebola virus disease, to contribute to the peace and prosperity of the region and the world.
Prime Minister Abe stated that ISIL poses a severe threat to the entire international order and is a serious problem even in Asia, including the issue of foreign fighters. He also said that in addition to observing the relevant UN Security Council resolutions, the Government of Japan would provide non-military support, such as humanitarian assistance, in coordination with the international community and that he expected a concerted response by the relevant countries.
Prime Minister Abe pointed out that responding to Ebola virus disease is an imminent challenge related to the peace and security of the international society, and that both border controls by each country and coordination by the international society are required in order to contain the outbreak of Ebola virus disease in West Africa. Prime Minister Abe also explained that the Government of Japan had expressed its support through a new contribution of maximum of 100 million U.S. dollars and that Japan would work on this issue in collaboration with the EAS member countries.
(2) Strengthening of EAS
Prime Minister Abe pointed out that while respecting ASEAN centrality, EAS should be strengthened as the premier forum of the region, and at the same time he welcomed ASEAN's stocktaking of EAS. Moreover, he stated that EAS should support Malaysia, the ASEAN chair for the next year, as well as Myanmar, the current chair, toward the 10th anniversary of EAS next year, and stressed that Japan would provide them with comprehensive support. He also suggested that next summit should be regarded as commemorative and that the secretariat function of the EAS should be strengthened in order to expand the political and security issues it deals with and to further reinforce the organization.
(3) Maritime Cooperation
Prime Minister Abe pointed out the necessity of maintaining and strengthening order at sea based on the principle of the rule of law. In addition to highly evaluating the third meeting of the Expanded ASEAN Maritime Forum (EAMF) this year, he stated that he expected an early decision on the host country for the next meeting. He also explained that Japan would cooperate with the Expanded ASEAN Seafarers' Training (EAST) Initiative in the field of the marine environment.
(4) Energy and Disaster Risk Reduction
Prime Minister Abe stated that advancing the LNG market in the region and making thermal power generation, which functions as a base load power source, as highly efficient and low carbon as possible are the key to balance economic development and measures for climate change. He explained that Japan would contribute to improving energy efficiency in the world by promoting its world-leading clean energy technologies. He also stated that the third UN World Conference on Disaster Risk Reduction would be held in Sendai in March next year.
(5) Infrastructure Development for "High-quality Growth"
Prime Minister Abe explained that in order to appropriately meet the significant infrastructure demand in Asia, Japan would develop a cooperation method for effectively mobilizing private funds by promoting public-private partnerships, in addition to infrastructure development by proactively utilizing Official Development Assistance (ODA). He noted that pursuing "quality" infrastructure with superior environmental and social consideration and life cycle costs was also very important, and Japan would implement "people-centered investment" to realize quality growth.

2. The Regional and International Situation

(1) Peacebuilding and National Reconciliation
Prime Minister Abe stated that Japan's path as a peace-loving nation will not change and with this as the foundation, it would implement the "Proactive Contribution to Peace" based on the principle of international cooperation. As a specific example of this and as the first step in its EAS initiatives in the fields of peacebuilding, national reconciliation, and regional development contributing to democratization, he explained that in the first half of next year, Japan intended to hold a High-Level Seminar on Peacebuilding, National Reconciliation and Democratization in Asia.
(2) South China Sea
Prime Minister Abe explained that the issues surrounding the South China Sea are directly linked to the peace and stability of the region and are a matter of concern for the entire international community. He stated that he hoped countries would exercise self-restraint over actions that would undermine peace and stability in the South China Sea. He mentioned that the Government of Japan supports actions based on "the three principles of the rule of law at sea" that he advocated in the Shangri-La Dialogue. From this perspective, he said that he strongly hopes that the Declaration of Conduct of Parties in the South China Sea (DOC) that was agreed upon in 2002 is fully implemented and the Code of Conduct (COC) is concluded promptly. Also, he noted that as unilateral actions are continuing in the South China Sea, which is a concern of many countries, he emphasized that in delimitated waters, coastal states must honor the principles established in the international law in exercising self-restraint to prevent unilateral actions that would cause a permanent physical change to the marine environment. Further, he welcomed ASEAN's efforts to form a common understanding on the specific actions in which states are required to exercise self-restraint in the South China Sea and called on the EAS to contribute to ASEAN's efforts through appropriate venues, such as the EAMF.
(3) North Korea
Prime Minister Abe explained that Japan's policy is to consistently aim for a comprehensive resolution to the various issues, including the nuclear, missile and abductions issues, and that North Korea's nuclear, missile and proliferation activities constituted a real threat. Therefore, he emphasized that proliferation activities through Southeast Asia should not be permitted, and that it is extremely important for the international society to solidly implement the UN Security Council resolutions, including on export controls, and to show a consistent and resolute position of not permitting North Korea to possess nuclear capabilities. He also stated that arms trading with North Korea was a violation of the UNSC resolutions and he hoped for an implementation of resolutions with further transparency by all countries. Moreover, he expressed Japan's concerns about North Korea's systematic and serious violations of human rights and called on every country to continue to cooperate toward improving the human rights situation in North Korea, including for an early resolution to the abductions issue.