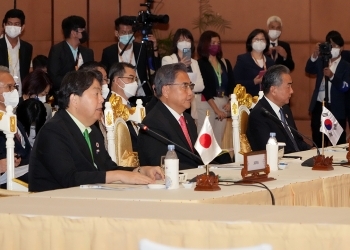 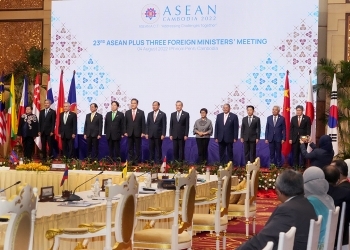 On August 4, commencing at 11:20 a.m. local time (1:20 pm, JST) for about 100 minutes, the 23rd ASEAN Plus Three Foreign Ministers’ Meeting (Chair: H.E. Mr. Prak Sokhonn, Deputy Prime Minister and Minister of Foreign Affairs and International Cooperation, Kingdom of Cambodia) was held in Phnom Penh, Cambodia. Mr. HAYASHI Yoshimasa, Minister for Foreign Affairs of Japan, attended the meeting. The overview of the meeting is as follows.

At the outset, Minister Hayashi outlined the following initiatives as some of the examples of Japan’s active contribution under the ASEAN Plus Three process.

Furthermore, Minister Hayashi stated that as Russia's aggression against Ukraine has given rise to many challenges, including soaring prices of energy, food and other commodities, as well as supply chain disruptions, now is the time to address these challenges in a coordinated manner, and it is even more important to maintain and strengthen the free and open international order based on the rule of law. He stressed that Japan supports ASEAN Unity and Centrality and emphasizes cooperation in line with the ASEAN Outlook on the Indo-Pacific (AOIP). Minister Hayashi also welcomed the adoption of the ASEAN Plus Three Cooperation Work Plan (2023-2027) at the meeting.